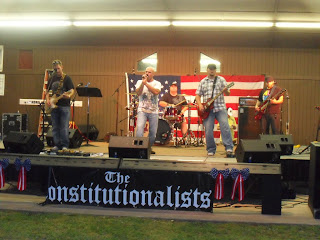 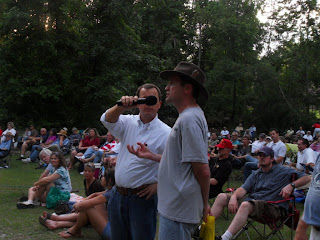 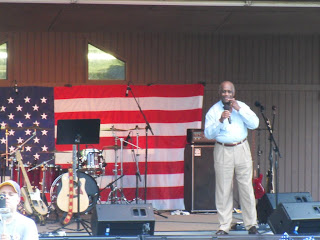 The weather favored the Douglas County Tea Party on June 4, 2010. A band of rain swept through earlier in the afternoon, but by the event’s start at 6:00 p.m., the weather was cool and dry. Residents of Douglas and Carroll counties met at Clinton Preserve in Villa Rica for a Tea Party celebration featuring conservative radio talk show host, Herman Cain.

Candidates for the 13th congressional district were out in force. This predominantly Democratic district, currently represented by David Scott, may be in play this year due to voter anger over stimulus, bailouts, Obamacare, and the economy in general. The Republican primary there has attracted a strong crop of candidates. Chip Flanegan, Deborah Honeycutt, Dave Orr, Mike Crane, Mike Murphy, and Hank Dudek were in attendance at the Tea Party.

Grass roots activist groups also had booths. Georgia Carry, a state group supporting second amendment rights, recruited members. A group called GOOOH (Get Out of Our House) advocated a single campaign to replace all 435 incumbents in the House of Representatives. The North Georgia 912 Project, an off shoot of Glenn Beck’s 912 Project, was also present to promote traditional American values.

The evening’s main attraction was conservative talk show host, Herman Cain. Mr. Cain currently has an evening talk show on Atlanta’s WSB (AM 750). He began his career working for Pillsbury, where he became the company’s youngest vice president in 1977. He later left to become an executive with the company’s Burger King division and the president of Godfather’s Pizza. He was also the first black president of the National Restaurant Association. He has also recorded a CD of gospel hymns (http://www.answers.com/topic/herman-cain). He has founded Herman’s Intelligent Thinkers Movement (HITM) as a nonpartisan group to resist the growth of big government (http://www.hitm.brookswebsolutions.com/home.html).

Mr. Cain had planned to broadcast live from the Tea Party, but technical difficulties dictated that the Tea Party be recorded with plans to broadcast it sometime during the week of June 7-11. Much of the Tea Party recording session consisted of the “rapid fire” segment of Mr. Cain’s show in which callers get one minute to pose a question or make a point, and then Mr. Cain gets one minute to respond. Anyone with a question was invited to ask it. All that was required was to wait in line. Questions did not have to be submitted in advance or approved in any way.

One question that was asked repeatedly was whether Mr. Cain plans to run for president in 2012. He was noncommittal, but said that he is praying for guidance on the subject. His sound crew did indicate that recent appearances on the Sean Hannity show have stoked nationwide interest in Mr. Cain’s possible candidacy.

The most memorable part of the tea party occurred near the end. A white-haired gentleman let a young woman go ahead of him in the rapid fire line so he could be last. When he reached the microphone, he introduced himself as Louis, a former Marine, and announced that he had recently heard the second, seldom played, verse of the Star Spangled Banner and then began to sing:

Oh, thus be it ever when free men shall stand
Between their loved homes and the war's desolation!
Blest with vict'ry and peace, may the heav'n rescued land
Praise the Pow'r that hath made and preserved us a nation!
Then conquer we must, when our cause it is just,
And this be our motto, "In God is our trust"
And the Star-Spangled Banner in triumph shall wave
O'er the land of the free and the home of the brave!


As Louis sang (actually the fourth and last verse; find the complete lyrics here), the surprised crowd began to stand to their feet, remove their hats, and cover their hearts with their hands. As he reached the more familiar last lines, members of the crowd joined in, and the entire crowd erupted into cheers at the finale. Upon completion of the song, Louis turned and hurried away, shaking a few hands that were thrust toward him as he walked. He quickly blended into the crowd, not to be seen again, but a photographer from secularstupidest.com recorded his performance and posted it on youtube for posterity.

There were no attendance figures available for the Tea Party, but Clinton Preserve’s parking area was full. The crowd was totally peaceful, polite, and diverse in spite of media claims that Tea Parties are racist, violent, and/or for the wealthy. All races were well represented, as was the full economic spectrum. (It is worthy to note that several of the conservative candidates were black and/or female.) The fact that so many citizens were motivated to come out to meet candidates and learn about the issues facing the United States bodes well for the future of our republic.

Thank you for your wonderful editorial on the Douglas County Tea Party.
To the best of our calculations, we had close to 3000 people in attendance.
Thank you Douglas County for supporting your local Tea Party

Wow - you captured lots of details from the evening. Great writeup. Thank you : )

Karen Handel's campaign was there a you mentioned. Website is www.karenhandel.com

Just for the record. There was at least one Democrat candidate in attendance. That was me, Mike Murphy,candidate for the 13th District. Regret that I could not stick around for all of the festivities. Kudos to the organizers and those patriots in attendance.
Let's sweep out the incumbent!

Mr. Murphy, I apologize for missing your party affiliation. Thanks for correcting me and thanks for attending!

Also, thanks to anonymous for posting Karen Handel's website. The omission was not intentional.