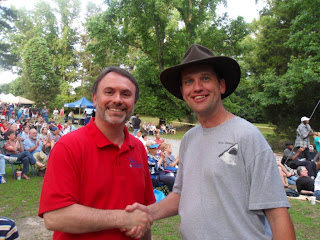 Ray McBerry is a native of Atlanta. He is an avowed Christian who considers himself to be a constitutionalist. According to his website, he is a life-long Republican, but that he does not support “the globalist, socialist policies of either the Democrat or Republican parties at the national level.”

McBerry is a former youth minister at a Stockbridge church as well as a teacher in the Henry County school system at Patrick Henry High School. Currently, Ray McBerry is the president of Ray McBerry Enterprises in Atlanta. He produces radio and television commercials for the Atlanta market.

A brief search of Mr. McBerry’s history did turn up two hints of scandal. In one, McBerry’s teaching certificate was briefly suspended (for one week in 2004) for counseling a girl who was not a student at his school. The girl’s father attempted to bring charges against McBerry, but, according to the campaign, the local judge refused to even allow charges to be filed [http://www.chattanoogan.com/articles/article_171542.asp ]. The report notes that McBerry has a valid teaching certificate to this day.

In the second case, an Atlanta woman claimed in May 2010 that she had an affair with McBerry when he was a youth minister. The woman, who is now twenty-four, claims that the affair took place eight years ago when she was sixteen. She claims that they had sex one time. McBerry denies the affair and says that the charges “came out of nowhere” [http://www.myfoxatlanta.com/dpp/news/woman-admits-relationship-with-mcberry-050410 ].

Taxes: McBerry proposes to abolish income and property taxes and replace them with a sales tax. He opposes any linkage of taxes to income, and would decrease the size of government.

Jobs: In addition to tax reform, McBerry would place renewed emphasis on vocational skills in Georgia schools to provide a ready work force for employers. Additionally, he would resist federal encroachment of intrastate commerce. He is one of the authors of the “State Authority and Intrastate Commerce Act” [http://www.statesurge.com/bills/hb-879-georgia-732992 ] which has been filed in the Georgia House of Representatives.

Gun Rights: McBerry opposes any effort to infringe on the right to keep and bear arms. He also supports legal immunity for firearms manufacturers in Georgia.

Life: McBerry is staunchly pro-life and is endorsed by Georgia Right to Life.

Education: McBerry is a former teacher with ten years teaching experience. First, he would move away from centralized federal and state control of schools, and return control to the local level. Second, he supports tax credits for school tuition as a means of increasing school competition. Finally, he would like Georgia schools to focus more on vocational skills.

Immigration: McBerry would use all state resources available to secure Georgia’s borders and apprehend illegal immigrants already here. He would bill the federal government for their detention. He would increase fines for employers who knowingly hire illegal aliens and would limit their ability to file nuisance lawsuits against the state.

Mr. McBerry also states that he will take a strong stand against federal encroachment into areas that the constitution preserved as the rights of the states. He notes that the federal government should be subservient to the states, not the other way around, and would use the tenth amendment to resist unconstitutional federal mandates, whether they are by federal legislation, court rulings, or executive orders.