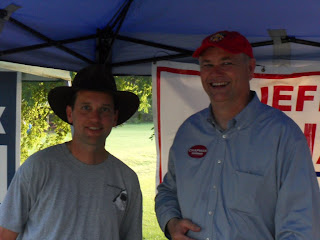 Jeff Chapman is a three-term state senator representing Georgia’s coastal third district. He is from Brunswick, where he started his career working in a paper mill. He later left the mill to start his own waste disposal business, which was purchased by Waste Management in the 1990s. After selling his business, he became a division president for Waste Management.

He began his career in public service on the Glynn County commission before being elected to the state senate. He also works with the Boy Scouts, the Exchange Club, and the Georgia Air National Guard. He was first elected to the senate in 2004.

Chapman is probably best known for his opposition to a Jekyll Island deal in which the Jekyll Island Authority (JIA) proposed to grant Atlanta development company Linger Longer be granted the right to build private condominiums on Jekyll Island, the right of first refusal for all Jekyll Island projects for 25 years, and millions of dollars in incentives. In his opposition to the deal, Chapman cited the lack of competitive bidding as disrespectful of the free enterprise system and an abuse of public trust [http://www.onlineathens.com/stories/120609/opi_532438790.shtml]. Shortly after Chapman wrote an editorial criticizing the deal, the Jekyll Island Authority canceled it.

Senator Chapman bills himself as a social and fiscal conservative. Here is a summary of his positions on some prominent issues:

Gun Rights: Chapman is rated A+ by the National Rifle Association. He supports the right to keep and bear arms for self-defense, sports, and hunting.

Education: Chapman would improve Georgia schools by working to improve student discipline in the classroom. He also reports returning more local control to school systems. He would establish a “clearinghouse” for teaching methods that work, as well encouraging experienced teachers to mentor new ones. Finally, he would like to make school budgets more efficient to make the best use of taxpayer dollars.

Life: Chapman has a 100% Pro-Life voting record and is endorsed by Georgia Right to Life.

Property Rights: Chapman opposes the misuse of eminent domain to take property for private development. He would work to close a constitutional loophole that allows the General Assembly to define “public use.”

Transportation: Chapman would like to increase efficiency and accountability in state transportation planning. He would also keep the entire proceeds of Georgia’s gas tax in the transportation fund (currently 1% out of the 4% tax goes to the general fund). Chapman also points out that of the 18.4 cents per gallon that Georgia collects for the Federal Highway Trust Fund, only 90% returns to Georgia. He would work to keep Georgia’s entire contribution.

In summary, Jeff Chapman is an experienced politician who is grounded in real-world business. He has a history of standing up against the political interests, including those of his own party.

Nice summary of Jeff Chapman’s work as a public servant. The only thing that I would add is that Chapman is the one GOP candidate for governor who is squeaky clean and has a flawless record of standing strong for the public interest. In rejecting the politics of favoritism, he has bucked special interests, powerful lobbyists, and the power brokers in his own party. A blue collar legislator, Chapman has been a champion of the internets of ordinary Georgians and a thorn in the side of the “politics as usual” gang that has run things in our state for way too long. I think he would make a first-rate governor, but the deck is solidly stacked against him in the GOP primary, for all the big money is flowing to the campaigns of the establishment politicians, one of whom will most likely win the election and get to abuse public trust for the next four years. If Georgians really wanted to shake things up in the Gold Dome, they would be flocking to Chapman’s cause and see that he wins
next month’s GOP primary election.