Posted by CaptainKudzu at 1:42 PM No comments:

A newcomer to the Republican presidential race for 2012 is Tim Pawlenty.  Pawlenty, known as “TPaw,” is the two-term governor of Minnesota and has been credited by the Wall St. Journal with offering the “most ambitious reform agenda so far.”

Pawlenty is a native of Minnesota and is a graduate of the University of Minnesota.  He originally planned to become a dentist, but changed his major to political science and then went on to earn a Juris Doctor from Minnesota’s law school.  After graduation, he worked as a labor lawyer and later become president of a software company.
He got his start in politics as an appointed member of the City Planning Commission in Eagen, Minn.  A year later, in 1989, he was elected to the city council.  In 1992, Pawlenty was elected to Minnesota’s House of Representatives.  He was re-elected four times and became majority leader in 1998.
In 2002, Pawlenty considered a run for Minnesota governor as well as a run for the U.S. Senate.  Although Minnesota’s GOP leaders preferred a different candidate, Pawlenty chose to run for governor when Vice President Cheney asked that he step aside to allow Norm Coleman to run for the senate seat.  Pawlenty won a three way race in the general election by campaigning on a pledge not to raise taxes, a twenty-four hour waiting period for abortions, education reform, and passage of a concealed carry law for guns.  Pawlenty won re-election in 2006, but elected not to run for a third term.
As governor, Pawlenty says he balanced Minnesota’s budget without raising taxes.  While he did cut spending, critics charge that his balanced budgets were also the result of accounting tricks such as borrowing from other accounts, increasing fees and accepting federal stimulus funds.  For example, Fox News reports that Minnesota schools are owed more than $1.4 billion by the state’s general fund.  The Minnesota cigarette tax was increased by 75 cents under Pawlenty, although he calls this a fee rather than a tax.  Other taxes were increased as well though without Pawlenty’s approval.  The Democratic legislature overrode his veto of a gas tax increase, voters increased the sales tax, and local government increased property taxes.
Though Pawlenty is no longer governor, Minnesota is facing a projected $5 billion shortfall, in part because spending cuts that Pawlenty enacted are beginning to expire.  Pawlenty defended his record, telling Fox News, "It's based on a big increase in projected spending — 20-some percent increase — that I never would've allowed."
A controversial aspect of Pawlenty’s tenure as governor involves Minnesota’s sharia-compliant home loan program.  As part of a program to expand home ownership, Minnesota’s state housing agency had set up a program that would allow Muslims to avoid paying interest on home mortgages, which many believe to be prohibited by Islamic sharia law.  Pawlenty has taken criticism for allowing the program, but according to a report by CBS News was not responsible for the program.  According to a statement by his office, the program was set up by the housing office acting on its own and Pawlenty ordered its termination when he became aware of it.
Another controversy in Pawlenty’s past involves his past support for carbon cap-and-trade.  In 2008, he even went so far as to make a radio ad with Janet Napolitano, a Democrat who was then the governor of Arizona.  Napolitano is now Secretary of Homeland Security.  By 2009, Pawlenty was writing letters to Congress to oppose cap-and-trade legislation that was being considered.  According to Minnesota Public Radio, Pawlenty still believes that manmade greenhouse gas emissions are responsible for global warming, but opposes cap-and-trade on economic grounds.  He now says, “… all of us should be focused on reducing emissions and pollution, but we need to do that in a way that doesn't wreck the economy, doesn't hurt our farmers [and] doesn't hurt our manufacturers….”  Pawlenty believes that nuclear power fits that description.
Most recently, Pawlenty earned publicity for coining the term “Obamneycare” to describe the similarities between Mitt Romney’s Massachusetts health insurance law and Barack Obama’s federal law.  Pawlenty’s phrase highlights the fact that Romney enacted a centralized health care reform featuring an individual mandate when he was governor of Massachusetts.  In what is likely an undesired endorsement, President Obama praised Romney’s Massachusetts law in a February 2011 speech.
Pawlenty’s campaign manager, Nick Ayers, also worked on Georgia Governor Sonny Perdue’s re-election campaign in 2006.  While in Georgia, Ayers was arrested and charged with drunk driving in Valdosta.  Last month, a Minnesota website posted the dash cam video of Ayers’ arrest on the internet.  Ayers is a Georgia native.
Pawlenty’s campaign in Georgia will be headed by Eric Johnson, former president pro tempore of the Georgia Senate and candidate for Georgia governor.  According to CBS Minnesota, Johnson called Pawlenty “the most conservative candidate in the race that can beat President Obama” and said that he “is right on the fiscal issues and right on the social issues.”
At this point, Pawlenty is a long shot for the Republican nomination.  A May 2011 Gallup poll shows him in sixth place with six percent of Republicans favoring him.  Those numbers might increase following a recent speech unveiling his economic plan in which Pawlenty called for tax cuts and a simplification of the tax code along with a constitutional amendment that caps government spending at 18 percent of GDP.  (Federal spending is currently at about 40 percent of GDP according to USgovernmentspending.com.)  Pawlenty’s plan is the polar opposite of the Obama economic plan and that might just be what voters are looking for in 2012.
http://www.examiner.com/elections-2012-in-atlanta/meet-the-candidates-tim-pawlenty">

Posted by CaptainKudzu at 10:00 AM No comments: 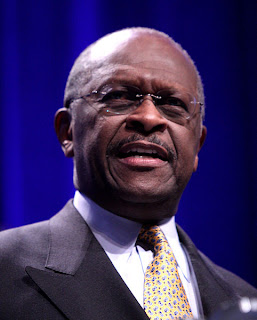 Photo credit:  Gage Skidmore/Wikimedia
Posted by CaptainKudzu at 10:00 AM No comments: