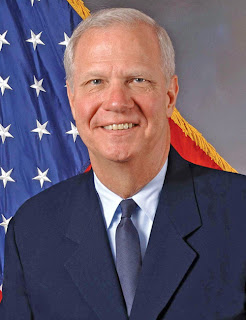 David Poythress is a native of Macon. He attended school in Bibb County and later earned a college degree and US Air Force commission from Emory law school. After graduation, he volunteered for duty in Vietnam, where he served as defense counsel and Chief of Military Justice at Da Nang Airbase.

After four years of active duty, Poythress started a civilian law practice in Atlanta and held a variety of positions in the Georgia state government. The offices that he has held include Assistant Attorney General, Deputy State Revenue Commissioner, and Secretary of State. Elected in 1992 and 1994, he served as State Labor Commissioner. He resigned from that office in 1998 to mount an unsuccessful campaign for governor. Poythress’ private law practice dealt primarily with taxation and public finance.

After leaving active military service, Poythress continued to serve in the Air Force Reserve. He eventually attained the rank of Brigadier General. In 1999, Governor Roy Barnes named Poythress as Georgia’s Adjutant General, the officer in command of Georgia’s Army and Air National Guard. Barnes also promoted him to Major General. Governor Sonny Perdue renewed his appointment as Adjutant General and promoted him to Lieutenant General. He also served in Operation Desert Storm.

Education: Poythress opposes budget cuts for education. He also opposes school vouchers. He would like to recruit more teachers, especially in math and science, while preserving the current defined benefit pension plan for teachers. Poythress would like to preserve or expand popular programs, such as the HOPE scholarship and Pre-K classes. He would expand parent participation and institute a program to decrease the number of drop-outs. He would preserve the role of arts in education as well as health classes featuring nutrition and exercise. He would provide increased opportunities for vocational education and tutoring. He opposes No Child Left Behind.

Transportation: Poythress would encourage telecommuting and flex time for state workers to alleviate Atlanta traffic. He would expand Georgia’s ports, rail lines, and heavy truck routes. He would prioritize state transportation projections based on need, rather than politics. He would begin long term planning for a mass transit commuter system linking Atlanta with Georgia’s major cities as well as those of neighboring states. He would give citizens the option of passing a sales tax to fund transportation projects.

Life: Poythress’ website makes no mention of abortion or life issues. He is reportedly pro-choice. He does favor sex-education to reduce the number of abortions.