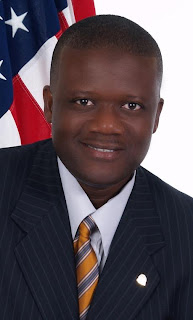 Carl Camon was born in Nashville, Georgia and grew up in Ray City, Georgia. Ray City is located in south Georgia, just north of Moody Air Force Base, which in turn is located near Valdosta. Camon served over ten years in the US Air Force and Air Force Reserve. He received a “below the zone” promotion and attained the rank of Staff Sergeant (E-5). His service in the military convinced him of the need to maintain a strong national defense.

The military also helped Camon advance his education. He received Associate degrees from Georgia Military College and the Community College of the Air Force. He also earned Bachelor, Masters, and Specialist degrees in education from Valdosta State University. His concentrations were in Mental Retardation and Severe Disabilities.

His political career began in 1993 as a member of Ray City’s city council where he served two terms. Later, he became the first African-American mayor of Ray City, eventually serving five terms from 1996 through 1997 and 2000 through 2009. As Ray City mayor, he helped to start Georgia’s first municipal pre-k program. He also founded the Mayor’s Youth Leadership Institute and the Mayor and Council’s Education Initiative Scholarship. Camon worked to obtain grants to modernize Ray City’s fire and police departments, and declared war on drugs in his city. While mayor, he was listed as one of “40 under 40” Rising Stars in Georgia.

In 2002, he was appointed by Governor Roy Barnes to a four year term as chairman of the County and Municipal Probation Advisory Council. The role of the council is to provide orientation and standardization for probation officers, as well as private providers of probation services. Other civic roles for Camon include membership in the Budget and Executive Committees of the Georgia Municipal Association and chairman of the Environment and Natural Resources Policy Committee.

Camon has also served in a variety of teaching roles. His resume boasts fifteen years of experience in education in jobs as varied as Assistant Professor of Education, Pre-k Director, and high school teacher. He was listed in Who’s Who Among America’s Teachers four separate times and was awarded Teacher of the Month.

It was in his role as teacher that Camon received the only blemish on his record. While teaching at a school in Valdosta in 2007, Camon was accused by several students of making sexual remarks, staring at the breasts of female students, and looking up their skirts. The NY Times reports that Camon denied the allegations, saying that the girls were angry at him for calls to the parents about bad grades ( http://www.nytimes.com/2010/03/19/us/19georgia.html ). The Times also reported that Camon had been accused of having an inappropriate relationship with a student on a previous occasion in which no probable cause had been found.

In the 2007 case, Camon was suspended for one week. Rather than accept the suspension, he resigned, saying that he refused to accept punishment for something that he did not do. His complete statement on the matter can be read here: https://docs.google.com/Doc?docid=0AfKEK8-LWmzhZGNmZDk0bTNfMjZjdjlwNnJkOQ&hl=en. After resigning, Camon was rehired by the same school system the following year, where he taught the same students in the same school. He maintains that he was falsely accused and unjustly suspended. He continued to teach in Valdosta until 2009 when he resigned to start a business, Teacher Advocacy and Protection (TAP) with his wife.

Here are Camon’s positions on some important issues:

Education: Camon believes that many of Georgia’s problems are linked to education, and commits to teach one class in each county during his term as governor. He also pledges $5,000 per year from his governor’s salary to scholarships for deserving high school students. Camon would like to return authority to teachers and increase their pay to the national average. He would also encourage teachers to retire after 25 years to reduce costs. Over time, he would phase out alternative schools and work to reduce the number of students who repeat grades. He is a strong supporter of pre-k, HOPE, and Quality Based Education.

Jobs: Camon would invest in the infrastructure of Georgia’s cities, which he believes would help to continue to develop economically. He would prioritize state spending and cut wasteful programs. He would offer incentives for the creation of small business and for hiring new employees. Camon would restructure Georgia’s welfare system to provide more job training. He would also expand opportunities for higher education to all citizens and encourage people to take personal finance training and counseling. He also believes that expansion of wind, solar and other green technologies will help Georgia. Mr. Camon would empower the Department of Commerce to market Georgia for tourism and industry.

Taxes: Camon would keep taxes low and believes that this will help to stimulate the economy.

Transportation: Mr. Camon would explore the possibility of building a high speed rail system to connect Georgia cities. He would also support regional mass transit systems. He would restore the Local Assistance Road Program (LARP) for cities and counties and increase regional representation in the Department of Transportation. He would work to increase the installation of electric power stations along interstate highways to facilitate the use of electric autos. Mr. Camon would support legislation to prohibit auto insurance companies from charging higher rates solely on the basis of poor credit scores. He would direct federal stimulus money to regions of greatest need. He would expand video surveillance of Georgia roads in an effort to ease congestion. He would also expand and secure Georgia’s ports.

Life: Camon’s website does not address life or abortion issues. In an email, he did state that he opposes abortion.