Trickle down: how hurting the rich hurts the poor 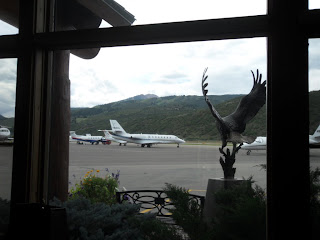 I work for a company that caters to rich people. We provide VIP transportation on private jets to the rich and famous. These are the business tycoons and captains of industry who have been vilified and targeted by the Obama Administration and the Democrats.

After the financial crash of 2008, our business was hit hard. Many of our clients lost millions in real estate and the stock market. The problem was compounded when President Obama and congressional leaders began castigating business leaders for spending corporate money on private jets. (Never mind that government officials were jetting around at taxpayer expense.


In a classic example of trickle-down economics in action, as our clients canceled their contracts with us, the effects cascaded far beyond the aviation industry. An obvious example is that my company needed fewer pilots and office workers. The company downsized by approximately one third. Many of the pilots who lost their jobs were based in Atlanta. When they were laid off, the state and their local governments lost tax revenue and picked up additional expenses such as unemployment benefits, health costs, and other public assistance programs.

Even those of us who were not laid off were not immune to the economy. We took pay cuts and overtime, which was once readily available, became nonexistent. With less pay, we had to spend less money. As we (and thousands of others like us) spent less money, local stores and restaurants made less money and, in turn, had to lay off employees. Accordingly, factories took fewer orders and manufacturing jobs were lost.

The effect did not stop there. Many Georgia airports were common destinations for our airplanes. We flew business people to Atlanta’s DeKalb-Peachtree for meetings. We flew golf fans to Augusta’s Bush Field for the Masters. We flew vacationers to St. Simon’s Island to sit in the sun or play golf. With fewer airplanes bringing visitors, these cities all suffered lost revenue.

The perception was that private jets were a rich man’s toy. The reality was that when the economy, stringent regulation, rising taxes, and government rhetoric hurt the rich, the lower income classes were hurt worse. Whether they realized it or not, the poor enjoyed a symbiotic relationship with the wealthy.

The good news is that trickle down works when things are good as well. When the wealthiest Americans start making money again, they will start spending it as well. There will be increased demand for new (and used) business jets. This will require factories to hire more workers. Laid off pilots will have to be rehired. Airports will see increased traffic and sell more fuel which will also require more workers. The effects will trickle down through the economy to restaurant workers, hotel workers, and the people and businesses that they interact with. All segments of the economy will benefit. Even government will reap tax revenues as people earn and spend more. Not least, I’ll be able to upgrade to captain, make more money, and better provide for my family and retirement.

As John F. Kennedy, a conservative Democrat said, “A rising tide lifts all boats.” In other words, we are all in this together. We can’t help part of the country by punishing another part. The solution to the economic crisis will be one that benefits us all.

Posted by CaptainKudzu at 6:46 PM