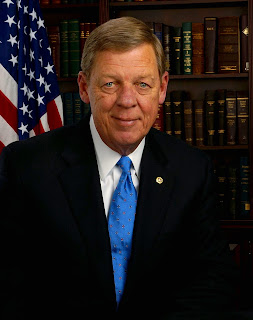 Johnny Isakson is a native Georgian and a second generation Swedish-American. He is a native of Atlanta and currently lives in Marietta. He graduated from the University of Georgia in 1966 and served in the Georgia Air National Guard from 1966 through 1972. He was discharged with the rank of Staff Sergeant.

In 1967, he opened the first Cobb County office of Northside Realty. He later became president of the company, a post he held for over twenty years, as the company grew from a small, family business to the largest independent, residential real estate brokerage in the southeast.

In 1974, Isakson lost a race for the Georgia House of Representatives. Two years later, he was elected to the General Assembly, where he served seven terms. He served as Minority Leader for two years. He ran for governor in 1990 and lost to Zell Miller. In 1996, on an abortion rights platform, he ran for the US Senate seat vacated by Sam Nunn. He lost to Guy Millner in the primary, who in turn lost to Max Cleland. In 1998, when Newt Gingrich retired, Isakson won a special election to take his place in the US House of Representatives.

In 2004, when Zell Miller declined to run for re-election to the senate seat he had been appointed to after Paul Coverdell’s death, Isakson was elected to take his place. He has shifted to the right on many social issues and now considers himself pro-life.

Isakson has been called a “libertarian leaning conservative.” He is rated A by the National Rifle Association, 100 by the American Conservative Union, 92 by the Christian Coalition, and has received the “Hero of the Taxpayer” award from Citizens Against Government Waste. You can view Senator Isakson’s voting record here: http://www.votesmart.org/voting_category.php?can_id=1721.

Spending: Isakson would like to move the federal budget to a two-year cycle to promote accountability and discipline. He supports transparency in budgeting and appropriations and has voted for earmark reform. He is a co-sponsor of the SAFE Commission Act, which would create a bipartisan budget-cutting panel. He supports a line-item veto to allow the president to single out wasteful items.

Taxes: Isakson supports extending the Bush tax cuts as well as cuts to the capital gains tax. He has voted for temporary relief from the Alternative Minimum Tax and would like to find a permanent solution. Isakson has introduced the Tax Code Termination Act (S 3047) to repeal the tax code and seek an alternative such as a flat tax. He is a supporter and co-sponsor of the Fair Tax.

Health Care: Isakson supports the repeal of Obamacare in favor of market based solutions. He opposes embryonic stem cell research that would destroy life as well as cloning. He introduced the HOPE Act (S. 30), which would allow research that is nondestructive to embryos.

Economy: Isakson introduced the home buyer tax credit, which passed for first time home buyers. He would like to expand the programs for all home buyers. He would like to see President Obama’s mortgage refinance programs expanded to all homeowners. Isakson favors a reinstatement of the uptick rule with regard to short sales in financial markets. He would also like to replace mark-to-market accounting rules with an amortization system. Isakson introduced legislation to create a commission to investigate the origins of the financial crisis. Isakson voted against the stimulus, but for TARP, although he says he disagrees with the way that the money was spent.

National Security: Isakson supports the purchase of the Lockheed Martin F-22. He has also supported pay and benefit improvements for soldiers and guardsmen. He has made several trips to both Iraq and Afghanistan to view the situation there first hand.

Energy: Isakson supports the use of alternative energy sources including nuclear power.

Guns: Isakson has an A rating from the NRA and is a strong proponent of second amendment rights.

Education: Isakson was an original author of No Child Left Behind.

Life: Isakson believes that abortion is permissible only in cases of rape, incest, and to protect the life of the mother. He is not endorsed by Georgia Right to Life.

Posted by CaptainKudzu at 1:14 PM