Election myth: Does the GOP want to ship jobs overseas? 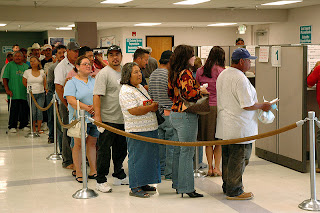 The third common myth being spread by Democrats this election season is that Republicans want to send American jobs to other countries. This is an obvious exaggeration. No politician of either party would want to send his or her constituents’ jobs out of their district and to another country. You don’t get re-elected that way and, above all else, most politicians want to get re-elected.

The question then becomes how best to preserve American jobs. President Obama and the Democrats believe that companies who move jobs to other countries should be punished through higher taxes or the elimination of tax breaks. A bill currently stalled in the senate purports to do just that.

However, it isn’t only Republicans that oppose this bill. At this point, Republicans don’t have the numbers to prevent passage of legislation by themselves. Some Democrats, including Max Baucus, chairman of the Senate Finance Committee, have joined the Republicans and business groups in opposing the bill on the grounds that it will make US companies less competitive.

On the other hand, conservatives believe that American companies will create jobs in the US if the government makes it cost effective for them to do so. There are many reasons that companies outsource jobs, but one of the biggest is labor costs. American workers are highly compensated, especially when non-salary benefits such as health insurance are considered. Workers in less developed nations are willing to do the same work for much less money.

Regulation is also a factor. The US has a dizzying array of complex regulations governing everything from environmental concerns to zoning. Some of these regulations are needed and some are not. Good or not, the cost of complying with government regulations can be significant. Other countries may have a regulatory environment that is easier to navigate.

Obamacare provides a good example of both employment costs and regulation. First, the mandates for increased coverage in the health care law are increasing the cost of health insurance coverage for companies. There will also be penalties if employers do not provide coverage for their employees. Second, there are new regulatory requirements in the health care law as well. One of the most well known is a requirement that companies issue 1099s to any company or individual with which they do more than $600 of business. The massive new costs associated with hiring and providing insurance for American workers may prove to be a powerful incentive for companies to move operations to other countries.

Add to this that the United States has one of the highest corporate tax rates in the world, even before state and local taxes are considered. When all these factors are considered, the US appears to have a somewhat unfriendly business climate.

There are answers to many of these problems. A true reform of health care with an eye toward lowering costs would be a major step forward. Easing the grip of unions so that wages can be determined by the market would also help. Lowering taxes would give companies much needed capital to grow their businesses. Finally, streamlining bureaucracy and eliminating the regulations that don’t make sense would also help.

Posted by CaptainKudzu at 7:13 PM