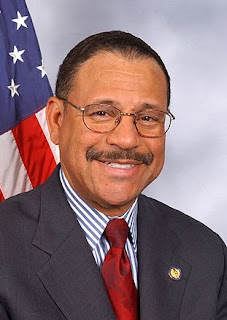 Georgia's delegation to the US House of Representatives currently holds thirteen seats. In the current Congress, the delegation is made up of seven Republicans and six Democrats. As the tide of the campaign turns against the Democrats, many observers are predicting unprecedented losses - up to 99 seats in the House - for the Democrats. It looks as though some Democrats of the Georgia delegation may also join the ranks of unemployed politicians.

In the second district, Sanford Bishop is defending against a challenge by Mike Keown, a state representative. Bishop, who voted for Obamacare as well as the stimulus and TARP, is virtually tied with Keown according to a recent poll. The poll shows Bishop leading Keown 47-46% with 7% undecided and a margin of error of 4.9%. The poll shows a trend in favor of Keown who has been gaining on Bishop over the last few months. The race is currently considered a tossup.

In the eighth district, Jim Marshall is being challenged by state Representative Austin Scott. Marshall is considered a conservative Democrat who has actually run ads distancing himself from Nancy Pelosi. His campaign website says that he favors extending all of the Bush tax cuts. He also voted against Obamacare, but for the stimulus and TARP. Nevertheless, the most recent projection shows Scott winning 49-47%.

In the twelfth district, John Barrow may be somewhat safer. After voting against Obamacare, but for the stimulus and TARP, Barrow is assumed to be fending off businessman Ray McKinney, who is endorsed by Sarah Palin. The absence of polls makes this race difficult to predict, but the difficulty of Marshall and Bishop in neighboring districts may mean that McKinney has a better chance at an upset than is generally believed.

The remaining Democratic districts in Georgia are the fourth (Hank Johnson), the fifth (John Lewis), and the thirteenth (David Scott). These districts are all located in Atlanta and draw strongly on Atlanta's liberals and minorities. They are all rated solidly Democratic in spite of the fact that all three men voted for Obamacare, the stimulus, and TARP (with the sole exception of Hank Johnson's vote against TARP). All Republican seats in Georgia are considered safe this year.

In spite of the close nature of these three races, it is likely that the Republicans will prevail in one or more of them. One of pollster Dick Morris' axioms is that undecided voters will likely go for the challenger. If the incumbent has not done well enough throughout his term to win over undecided voters prior to the last couple of weeks of the campaign, he has little hope of doing so. The taint of the recession, the stimulus, Obamacare, and looming tax increases make it all the more difficult for Georgia's Democrats to win conservative districts this year.

Posted by CaptainKudzu at 8:58 PM