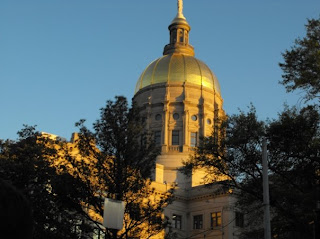 The normal duties of the Lt. Governor include acting as President of the Senate. Although he cannot vote or introduce legislation, he influences the lawmaking process by working with senators. He is also part of the committee that determines committee appointments and chooses the chairman for each committee.

This year there are three candidates for Lt. Governor.

Casey Cagle is the incumbent Lt. Governor and is a Republican. Cagle is a native of Gainesville and attended Gainesville State College and Georgia Southern University. He opened a tuxedo rental business in Gainesville in 1986 and founded Southern Heritage Bank in 1999. In 1994, he was elected senator at 28 years old, making him Georgia’s youngest senator. He was re-elected five times until he was elected Georgia’s first Republican Lt. Governor in 2006. Cagle initially planned to run for governor, but withdrew due to a spinal and nerve illness that required surgery.

Cagle cites the passage of budget without tax increases during the current recession as one of his top accomplishments, although critics note that some fees were increased and a state program that provided property tax credits was dropped. He was also involved in the passage of the JOBS (Jobs, Opportunity, and Business Success) Act which involved business tax credits. He has also acted to cut government spending and waste.

Carol Porter is from Wrightsville, Georgia. The Democratic candidate for Lt. Governor, she is married to Dubose Porter, who lost to Roy Barnes in the gubernatorial primary. She attended the University of Georgia and worked as a copyrighter for the Dublin Courier-Herald. After marrying Dubose, the couple bought the newspaper. The business eventually grew to nine newspapers. Porter is currently general manager of the family newspaper business and active in civic organizations.

Porter wants to focus on improving Georgia’s education system and cutting the dropout rate. She would also push for a comprehensive state transportation plan. She also proposes tax incentives for business and public health reforms.

As a Libertarian, Barber believes in both economic and social freedoms. He opposes cap-and-trade as well as federal intervention in the education system. He opposes government bailouts and favors low taxes. He believes in free markets for health care, favors immigration, and opposes the war on drugs.

Posted by CaptainKudzu at 3:13 PM