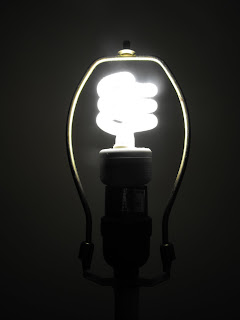 You light up my life... but not with an incandescent bulb!


How many Democrats does it take to screw a light bulb company? Answer: 272, including 44 in the Senate and 228 in the House of Representatives. They were joined by 36 House and 19 Senate Republicans. (http://www.govtrack.us/congress/bill.xpd?bill=h110-6)

In December 2007, Congress passed the Energy Independence and Security Act of 2007, which, among other things, banned most incandescent light bulbs beginning in 2012 (http://www.aboutlightingcontrols.org/education/papers/2008_energy_law.shtml). The act also contained a renewable fuel standard (RFS) which mandated increased ethanol production and led to food shortages in 2008 (http://www.heritage.org/Research/Reports/2008/04/Time-for-Second-Thoughts-on-the-Ethanol-Mandate), as well as several other mandates.

A prime motivation behind the light bulb ban was fears of global warming. The law passed prior to the East Anglia email controversy in 2009, in which pilfered emails purported to show that climate scientists collaborated to cover up inconsistent climate data and stifle dissent (http://www.examiner.com/conservative-in-atlanta/the-climate-conspiracy), so global warming skeptics were relatively powerless. It was also passed prior to the economic crash of 2008, when it seemed that the economy would remain strong regardless of government meddling.

As we now understand, though, government action is subject to the Law of Unintended Consequences. This is the political equivalent of Newton’s Third Law of Motion, which states, “For every action, there is an equal and opposite reaction.” For every government action to correct a perceived problem, a new problem is created elsewhere.

With incandescent bulbs disappearing from the market, the replacement would be compact fluorescent (CFL) bulbs. There are pros and cons to both types of light bulbs (http://greennature.com/article256.html). CFL bulbs produce the same amount of light as incandescent bulbs, but use a fraction of the electricity. CFLs also last up to eleven times longer than incandescent bulbs. These factors contribute to cost savings over the life of the bulb.

On the other hand, CFLs generate consumer complaints in several areas. First, CFLs do not power up immediately. A CFL in a fluorescent light fixture in our kitchen takes noticeably longer to illuminate than the old bulb. Many consumers also dislike the type of light that CFLs produce, although technology is increasing consumer choices in this area.

More noticeable to many consumers is the purchase price of CFL bulbs. Where incandescent bulbs often retail at approximately $1.60 for a four pack (forty cents per bulb) in my local stores, CFLs often cost more than $5 for a two-pack ($2.50 per bulb). Thus, CFLs cost approximately six times more than traditional light bulbs. They may save money in the long run, but that is cold comfort to an apartment tenant struggling to meet a budget or a homeowner facing foreclosure.

Finally, and most disturbing, CFLs contain mercury, a hazardous material that can cause impaired neurological development in children (http://www.epa.gov/mercury/effects.htm). It is hard enough to clean up the broken glass from a traditional light bulb, but CFLs are even worse. The EPA recommends a lengthy procedure for cleaning up a broken CFL (http://www.epa.gov/cfl/cflcleanup.html), beginning with evacuating the room for at least fifteen minutes and shutting off the central heat or air condition. Additionally, you may not be able to throw away the CFL in your normal trash disposal manner, since some states mandate special disposal or recycling techniques even for unbroken CFL bulbs. Georgia does not have any specific regulation that I can find, but Home Depot does offer CFL recycling.

One foreseeable consequence of the law was the loss of jobs. In September 2010, GE closed its last incandescent light bulb factory in the US (http://www.washingtonpost.com/wp-dyn/content/article/2010/09/07/AR2010090706933.html). The 200 workers there lost their jobs. Since CFLs require more labor to produce, the company is replacing the US factory, which was located in Virginia, with a new factory in China, where labor is cheaper. It is unlikely that the US workers, many of whom are in their 40s and 50s and have been with the company for decades, will find new “green” jobs soon.

Ironically, the energy savings that Congress hoped to gain by taking away consumer light bulb choice may prove illusory. In 1987, the city of Traer, Iowa handed out 18,000 CFL bulbs to its citizens in an attempt to reduce energy usage. Residential electricity use actually increased by 8% as people responded to cheaper light by using more of it (http://www.heartland.org/full/28516/GE_Closes_Last_Incandescent_Light_Bulb_Plant_Jobs_Sent_to_China.html). An axiom of economics is that as price decreases, demand increases.

The example of the great light bulb ban is a story that is likely to be repeated as long the Democrats are in power. Obamacare, the finance reform, and other nanny state laws are likely to seem similar unintended consequences. Some goods and services that were previously taken for granted will likely become unavailable. Others might still be available at an increased cost. In any case, the poor are likely to be most adversely affected by changes meant to help them.