The truth about the Tea Party revolution 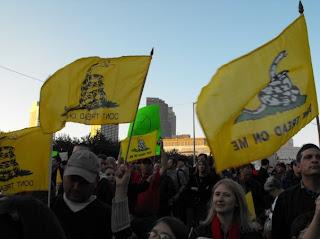 Years from now, when the history of the Obama Administration is written, we will see that one of President Obama’s most enduring contributions to American history was to inspire the Tea Party movement. Japanese Admiral Yamamoto is rumored to have said after the attack on Pearl Harbor, “I fear all we have done is to awaken a sleeping giant and fill him with a terrible resolve” (http://bit.ly/arfK87). A more colorful version of the quote has him saying, “Gentlemen, we have just kicked a rabid dog” (http://bit.ly/arfK87). It is easy to imagine President Obama saying something similar, or even more colorful, about the Tea Parties.

Many newer sympathizers to the Tea Party are moderates that supported President Obama in 2008. Obama ran on a faux conservative platform and promised to usher the country into a new post-partisan era. After taking office, Obama veered sharply to the left and the political climate in Washington became even more sharply partisan than before. With heavy majorities in both houses of Congress, the Democrats apparently saw no reason to reach across the aisle to the Republicans. After all, the Republican minority was so small that they couldn’t even mount an effective filibuster.

The Tea Parties originally began as a protest against the President Bush’s TARP (Troubled Asset Relief Program) bailout of banks and President Obama’s stimulus program. The idea reportedly began on January 19, 2009 with Graham Makohoniuk, a trader who posted an invitation on internet forums to mail tea bags to members of Congress who had voted for the bills (http://bit.ly/8X65Hc). The idea was spread by a forum moderator who was also director of FedUpUSA, a group formed as a response to the March 2008 bailout of Bear Stearns.

The Tea Parties went viral after a televised rant on CNBC by Rick Santelli from the floor of the Chicago Mercantile Exchange on February 19, 2009. Santelli railed against the stimulus and mortgage bailouts to the delight of the traders looking on. When he ridiculed the Democratic notion that “you can buy your way into prosperity” (http://bit.ly/c9fwOY) the rant went viral and Santelli’s “silent majority” responded. They were silent no longer.

Shortly after, Tea Party rallies were held around the country on April 15 to oppose the bailout mentality, the expansion of government, and the looming tax increases to pay for it all. I attended one of these rallies with my five-year-old son at the Georgia state capitol in Atlanta. As Santelli had guessed, we found a cross section of America. There were people of all races, creeds, and colors. The common denominator is that they all opposed where Obama and the Democrats were trying to take the country. (Well, not all. There was a small group of about a half-dozen pro-Obama counterdemonstrators.)

Conservatives and moderates don’t usually demonstrate. We have lives. We have jobs to go to, families to feed, and things to do. When hundreds of thousands of conservatives and moderates started coming out to protest Obama’s policies, it should have been a sign for him to slow down, reach out to his opponents, and find common ground. Instead, the Democrats knew that they would likely never have such large majorities again and proceeded to ram their agenda down the throats of an increasingly angry electorate.

Throughout the summer of 2009, the movement grew. There were more rallies on Independence Day. When members of Congress went home on summer recess, they faced angry constituents at town hall meetings. On September 12, 2009, the Tea Parties marched on Washington in what may have been the largest conservative protest ever held in Washington, DC.

Tempers continued to flare throughout the winter as the Democrats continued to push Obamacare through Congress by any means necessary. One way to steamroll opposition was by belittling the Tea Parties. House Speaker Nancy Pelosi said that the “we call it Astroturf; it’s not really a grass roots movement. It’s Astroturf by some of the wealthiest people in America….” (http://bit.ly/aqGDto).

As liberals are wont to do, when it doubt, they cried “racism.” Representatives Emanuel Cleaver, John Lewis, and Andre Carson claimed that they were spit upon and subjected to racial epithets by opponents to Obamacare outside a House office building (http://bit.ly/8X65Hc). Congressman Barney Frank claims that he was subjected to a gay slur. In spite of numerous television cameras, as well as a reward offered by blogger Andrew Breitbart for evidence of the claims, there has never been a confirmation of the claims.

After the passage of Obamacare on March 20, 2010 (a date which will live in infamy), Tea Party protests continued and became a stop on the campaign trail for many candidates. A Tea Party held in Douglasville, Georgia (http://exm.nr/c5qNLD) was emceed by talk show host Herman Cain (who, as a black man, was probably somewhat surprised to learn that he was hosting a racist event according to the news media!). The Tea Party featured numerous Republican, Libertarian, and even a few Democratic candidates.

Ironically, the first victims of the Tea Party were Republicans. As primary season rolled into full swing, moderate Republican incumbents began to fall to insurgent Tea Party challengers proving that the Tea Partiers were not controlled by the Republican establishment. In contrast, they were almost as angry at Republicans who enabled the Democrat’s big government agenda as they were at the Democrats themselves. One of the first to fall was Bob Bennett of Utah, a four term Republican senator who had voted for TARP and had crafted a compromise health care bill that fell flat (http://bit.ly/9QNRjn). In Kentucky, Rand Paul, son of libertarian Republican Rep. Ron Paul, won the Republican primary over a candidate favored by the party establishment. Next came Lisa Murkowski, senator from Alaska who was upset by Tea Party favorite, Joe Miller. Most recently, in Delaware Christine O’Donnell defeated establishment Republican Mike Castle. Tea Parties are making inroads into state politics as well. In New York, Carl Palodino defeated perennial loser Rick Lazio for the Republican nomination for governor and is very close to Democratic establishment candidate Andrew Cuomo in the polls. The next test for the Tea Parties will come on November 2 when the Tea Party Republicans face off against the Democrats.

Many are still uncertain who the Tea Partiers are and what they want. Far from being out of the mainstream, a Gallup poll shows that the makeup of the Tea Parties reflects the demographics of the nation itself (http://bit.ly/dxiVvl). In almost all categories listed, the Tea Party mirrors the demographic makeup of the nation almost exactly. Three notable exceptions are “Democrats” (8% Tea Party vs. 32% US), “Less than $30,000 annual income” (19% Tea Party vs. 25% US), and “Non-Hispanic Blacks” (6% Tea Party vs. 11% US). These three groups have a vested interest in preserving Democratic rule for partisan reasons, to preserve entitlements, and for racial solidarity.

The story of the Tea Parties is the remarkable story of the meteoric rise of a grass roots movement, which resulted in a hostile takeover of the Republican Party. It has fired the imaginations and anger of the country as people realize that they can fight back against Washington and win. Two years ago the Tea Party did not exist, but now a quarter of Americans claim membership in its ranks (http://bit.ly/asnTay). Further, 46% of Americans believe that the Tea Party is good for the country, while only 31% disagree (http://bit.ly/aQeQq9).

Thanks to the Tea Party (and the arrogance of the Democrats) the Republicans will win big in November. However, the true test of the Tea Party will be long term. Will the Tea Party activists be able to maintain control of the Republican Party and avoid a slide back into the corruption and meandering that led to the Democratic victories of 2006? Or will Tea Party Republicans succumb to the temptations of power and abandon their principles to maintain it? If the Tea Parties ultimately fail, the entire nation will pay the price in the form of high unemployment, high taxes, a sluggish economy, and disappearing freedoms.
Sources:
http://en.wikipedia.org/wiki/Isoroku_Yamamoto%27s_sleeping_giant_quote
http://en.wikipedia.org/wiki/Tea_Party_protests
http://www.youtube.com/watch?v=APAD7537RN0&feature=related
http://thinkprogress.org/2009/04/15/pelosi-astroturf
http://www.examiner.com/carroll-county-elections-2010-in-atlanta/herman-cain-featured-at-douglas-county-tea-party
http://www.americanthinker.com/2009/09/a_sham_compromise_health_care.html
http://www.msnbc.msn.com/id/37038395/ns/politics/
http://www.foxnews.com/politics/2010/05/18/tea-party-favorite-rand-paul-wins-senate-gop-primary-kentucky/
http://www.huffingtonpost.com/2010/09/14/new-york-gop-gubernatoria_n_716852.html
http://www.gallup.com/poll/127181/tea-partiers-fairly-mainstream-demographics.aspx
http://www.rasmussenreports.com/public_content/politics/general_politics/april_2010/tea_party_profile_many_ways_to_describe_a_movement
http://www.rasmussenreports.com/public_content/politics/general_politics/may_2010/46_say_tea_party_good_for_america_31_disagree
Villa Rica GA
September 25, 2010

Posted by CaptainKudzu at 4:24 PM