Confessions of a Tea Party voter 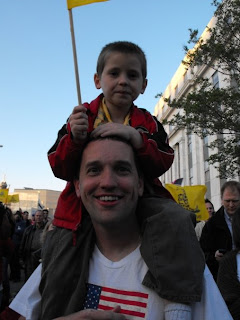 I am looking forward to November 2 in a way that I have never looked forward to an election before. I have been voting for twenty years now, and the groundswell of voter anger is something that I have never seen. Much of what is wrong with the Obama Administration can be seen through the story of his health care reform law.

The health care struggle took approximately a year. For most of that time, public opinion was strongly against the president’s version of reform. Members of Congress faced a series of angry town hall meetings with their constituents who opposed the law in the summer of 2009, yet the bill continued to wind its way through the legislative process. Finally, on March 20, 2010, against strong public opposition, the Patient Protection and Affordable Care Act became law.

Before passage of the law, President Obama told Americans that the reform would reduce costs (http://www.americanthinker.com/blog/2010/03/obama_you_will_see_premiums_fa.html). Obama also told Americans that the individual mandate to purchase health insurance (which he had opposed in the campaign) was not a tax (http://blogs.abcnews.com/george/2009/09/obama-mandate-is-not-a-tax.html).

Now, six months after the passage of the law and just over a month prior to the election, the truth is coming out. First, in order to defend the individual mandate against charges that it is unconstitutional, the Obama Administration changed its story and began saying that the mandate was a legal under the government’s constitutional power to tax (http://www.nytimes.com/2010/07/18/health/policy/18health.html). Either Obama was lying then or his staff is lying now.

Almost immediately after the law passed, reports began coming in that it would actually increase the cost of health insurance. There were numerous mandates in the law, such as requiring “free” preventive care, requiring that insurers cover dependent up to age 26, and eliminating maximum benefit limits. These mandates make it more costly for insurers to provide coverage. Now millions of Americans are finding that their health insurance premiums are being increased (http://www.jsonline.com/business/103861279.html). The alternative is for insurers to go bankrupt.

More recently, one of the first aspects of Obamacare to go into effect was the requirement that insurers start accepting children with pre-existing conditions by September 23 (even though Congress forgot to put this in the law). In response to this mandate, many insurance companies have chosen to stop selling child-only policies (http://www.washingtonpost.com/wp-dyn/content/article/2010/09/20/AR2010092006665.html ). Because the law made it impossible for insurers to sell these policies without losing money, they were forced to stop selling the policies at all in order to remain solvent. Perhaps Congress should have included a corporate mandate that required insurance companies to keep selling policies. This would work until they went out of business.

Opposition to the policies of Obama and the Democrats led to the creation of Tea Party protests mere months after Obama’s inauguration (http://www.examiner.com/conservative-in-atlanta/the-truth-about-the-tea-party-revolution). The Tea Party began as a protest to the wasteful and ineffective stimulus bill that spent almost a trillion dollars with no appreciable effect on the economy. They quickly grew as the giveaway programs, bailouts and government takeovers increased.

A new poll shows that the Tea Party is now more powerful and influential than President Obama himself (http://www.examiner.com/conservative-in-atlanta/the-truth-about-the-tea-party-revolution). As more Americans realize that Democratic rule means less freedom, more taxes, and more expensive products the Tea Party will continue to grow larger.

That is why I look forward to November 2. I want to vote to restore fiscal discipline to government and free markets to the economy. Cutting spending and keeping taxes low will help to spur the economy and create real jobs. It will also prevent an even larger looming economic disaster.
Posted by CaptainKudzu at 11:46 AM