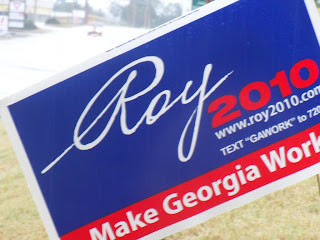 Roy Barnes is a Mableton native and a life-long resident of Cobb County, where his family owned and operated a general store. He is a graduate of the University of Georgia law school. He became the youngest member of the Georgia state senate at 26 years old when he was elected in 1974. He served eight terms in the senate, before leaving to run for governor in 1990. He was defeated by Zell Miller in the Democratic primary.

In 1992, he returned to politics when he was elected to the Georgia House of Representatives. He served there until 1998, when he ran again for governor. This time he was elected.

A major achievement of Barnes’ term as governor was the removal of the Confederate battle emblem from Georgia’s state flag. In 2001, the flag was changed to a field of blue with a large state seal in the center, above five flags representing Georgia’s history and the words “In God We Trust.” This was an unpopular move that many believe was instrumental in his re-election defeat. Nevertheless, the move earned him a Profile in Courage award from the John F. Kennedy Library in 2003.

Education reform was also a hallmark of Barnes' tenure as governor. His administration resulted in more centralized control of Georgia schools. He also ended tenure for new teachers and required students to pass a graduation test to advance to the next grade, effectively ending social promotion. His website also notes that he reduced classroom sizes and increased pay for teachers. Many of these reforms were also unpopular.

Additionally, Barnes passed tax cuts for family farms and homes. He also created a sales tax holiday for Georgia. Additionally, he passed patient’s rights and anti-predatory lending laws. While he was governor, Barnes was known as “King Roy.”

More recently, Barnes argued before the Georgia Supreme Court against Georgia’s voter ID law. The law, passed in 2005, required that Georgia voters show a photo ID to vote. Barnes claimed the law was unconstitutional because some voters did not have driver’s licenses and paying for an ID would cause a burden on the poor. The case was dismissed by Georgia’s Supreme Court since the only plaintiff in the case had a photo ID and therefore had no standing to sue. The United States Supreme Court upheld the law in 2008 (http://www.answers.com/topic/roy-barnes#Governor_of_Georgia ).

Also, Barnes was recently appointed co-chairman of a nonpartisan commission on No Child Left Behind. The commission, sponsored by the Aspen Institute, is designed to seek improvements in federal education policy.

Since winning the Democratic primary, Republican opponents have accused Barnes of making an apology tour (http://politifact.com/georgia/statements/2010/sep/15/republican-governors-association/barnes-and-obama-sorry-gop-says/). He has apologized for not valuing and listening to teachers during his previous administration as well as for not explaining why he made some “hard decisions” as governor. Additionally, he also says that he has learned that he should listen more.

Some of Gov. Barnes’ stances on key issues are noted below:

Jobs: Barnes would issue an executive order to retrofit state and public buildings for energy efficiency. He would also create incentives for medical research in Georgia. Barnes believes that agriculture remains an important part of Georgia’s future and wants to increase the number of finished agricultural products, as opposed to raw materials, that Georgia exports. He believes that Georgia’s agriculture could make the state a leader in green jobs and the production of biofuels.

Education: Barnes is critical of recent cuts in the education budget, cuts in teacher salaries, and teacher furloughs. He would focus on math, science, language and special education and work to reduce class size. Barnes would have two classroom teachers on his staff as governor to ensure that all policy discussions stay grounded in classroom reality. He would also convene teacher panels provide communications between teachers and policymakers. Barnes wants to minimize the number of class days devoted to standardized testing. Finally, he would like to integrate Georgia’s high schools and technical colleges to promote more vocational training.

Transportation: Barnes would like to implement an elevated light-rail system to move commuters from Atlanta to outlying suburbs, much farther than the existing MARTA system. He would also connect Georgia’s major cities with light-rail systems, while working to improve Georgia’s roads.

Life: Barnes’ website makes no mention of his position on life or abortion.

My Two Cents: There are no more conservative Democrats. Mr. Barnes previous administration was somewhat similar to President Obama’s administration. Gov. Barnes pushed forward with initiatives, such as the centralization of the educational system, that were very unpopular with the people of Georgia, and, as a result, helped to elect the first Republican governor in Georgia since Civil War reconstruction.

Now many of his proposals echo President Obama’s failed federal policies. Barnes wants to spend money that the state does not have on projects designed to stimulate the economy. I have attempted to contact the Barnes campaign on several occasions to find out where the money to pay for these projects will come from. I am still waiting for a response. Barnes’ statement that one of his first priorities would be to install low flow toilets in all schools and state buildings reflects just how far out of touch Barnes is.

A Barnes administration would take Georgia where we don’t want to go. His policies would lead to more government interference in the marketplace and ultimately higher taxes. His policies would drive more businesses away from our state and cost jobs. We have seen how his policies work on the federal level and we don’t need them in Georgia.

Posted by CaptainKudzu at 3:06 PM