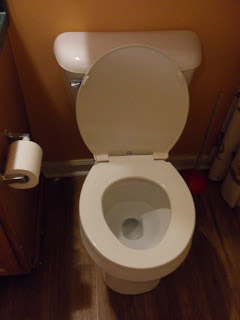 Former governor and Democratic gubernatorial candidate Roy Barnes has a plan to put Georgia back to work. One of his highest priorities in implementing that plan, which he believes will solve the job and revenue crisis in Georgia, is… low flow toilets.

According to his campaign website (www.roy2010.com), Barnes says, “One of my first orders of business will be to retrofit every state building and public school in Georgia for clean, efficient energy consumption – this includes the use of low-flow toilets and the expansion of our sewer systems where necessary. These projects will reduce the state’s energy and water costs in the long run, while putting Georgians back to work right now.”

Barnes doesn’t say where the cash-strapped state government will get the money to fund these massive renovation projects. Currently our state is so short of money that we have already had to furlough teachers, close state parks and cut government services to the bone.

The installation of the toilets will certainly be expensive. To get some idea how expensive it would be, I looked at the price of a low flow toilet on HomeDepot.com. Admittedly, the State of Georgia can probably bargain a better price than Home Depot retail, but it gives us a place to start. Next, I found that there are 2,487 public schools in Georgia (http://georgia.educationbug.org/public-schools/). If we assume that there is an average of twenty toilets to be replaced in each school, which is probably a low estimate, we find that the cost of the toilets – not including installation – would exceed 12.3 million dollars. This figure also doesn’t include Barnes’ other sewer projects and assorted potty paraphernalia.

My first thought at that point was “that’s a lot of crap!” In the current economic climate, couldn’t we find a better use for 12 million dollars? For example, in Georgia the average teacher’s salary is $48,300 (http://teacherportal.com/salary/Georgia-teacher-salary). Transferring that money to the schools would save 255 teacher jobs. New teachers in Georgia make $34,442. That same amount of money could hire 358 new teachers. That is more than two teachers per county!

In choosing to attack the problem of water conservation, Barnes is tackling an issue that was at the forefront of every Georgians mind… two years ago. Since then we’ve had lots of rain and even record floods. Granted, water rights and conservation are topics that Georgia and its neighbors need to deal with, but Georgians don’t feel the urgency that we did two years ago when the lakes were going dry.

Today, the issue on everyone’s mind is the economy. In July 2010, Georgia had an unemployment rate of 9.9% (http://www.bls.gov/web/laus/laumstrk.htm). That is a ranking of 39 out of the 50 states and the District of Columbia. People are worried about keeping their jobs or finding a new one.

Barnes makes the point that these renovations will save the state money in the long run. However the high up-front costs mean that the new potties will not pay for themselves for many years. The $248 invested per toilet might save a few dollars per year on each buildings water bill.

Barnes would probably also say that by the state could help stimulate the economy by buying toilets and hiring workers to install them. The problem with this view is that while the costs to the state are great, the impact is small and temporary. No exact figures are available, but I would guess that around 99.9999% of Georgians are employed in non-potty related industries.

The flip side is that, unlike the federal government, Georgia can’t print money to pay its debts. When the potty bill comes due, the state government will either have to start paying interest on the debt or raise taxes on those of us who still have jobs, businesses, and houses. This will further slow economic growth.

The ultimate effect will be similar to President Obama’s federal stimulus programs. It will cost enormous sums of money to employ a small number of people while siphoning money away from private businesses that can create real jobs. The stimulus money may as well have been flushed down a massive federal potty.


To paraphrase an old saying, “there is no such thing as a free potty.”

Please feel free to comment as long you don’t have a potty mouth.

Posted by CaptainKudzu at 11:28 AM