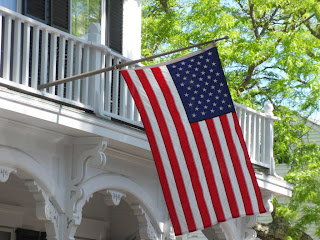 What makes America different? We are blessed with a large country, rich in natural resources, but many other countries with similar physical blessings lag behind the United States in many areas.

Throughout our short history, the United States has been a light to the world. Our freedom, rule of law, and philosophy of equality have inspired countless other revolutions around the world. Our statesmen penned documents that enshrined individual rights and the freedom to make your own destiny. Our scientists and inventors sparked the Industrial Revolution. Our businessmen turned these ideas into products and companies that raised the standard of living of the world. Our fighting men have selflessly given their lives to protect innocents around the globe.

Why is it that one young upstart of a nation could so change the world? Author Michael Medved points to several studies that suggest that Americans benefit genetically from the inherited traits of the immigrants who left everything to come here. Medved points to work by Peter C. Whybrow of UCLA and John D. Gartner of Johns Hopkins University Medical School that shows that it took special people to make the journey to the New World.

For all the thousands of people that came to America to find a new life, more stayed at home. Even during times when difficulties such as famines and persecution inspired mass migrations, most people chose to take their chances at home. By some estimates, only two percent of the population of the Old Country would have left home to take their chances abroad (http://townhall.com/columnists/MichaelMedved/2008/05/14/respecting_-_and_recognizing_-_american_dna/page/full).

The same traits that made these future Americans leave their ancestral homes would have enabled them to succeed on the frontier and in business. A penchant for risk taking, a willingness to work hard, optimism about the future, self confidence and willingness to take responsibility for their own success or failure were key factors in spurring immigrants to cross the oceans and were equally instrumental in helping them to build farms and businesses on the frontier. Whybrow states that Americans possess a unique “dopamine receptor system – the pathway in the brain that figures centrally in boldness and novelty seeking” (http://townhall.com/columnists/MichaelMedved/2008/05/14/respecting_-_and_recognizing_-_american_dna/page/full).

With the establishment in the United States of free market capitalism and representative democracy, we gained political and economic systems that complemented the genetic makeup of the newly American immigrants. A newly arrived “go-getter” could step off the boat and in very short order own a business that provided wealth and respect beyond his Old World dreams. In contrast to the monarchical and authoritarian governments of most of the rest of the world, a second generation immigrant could hope to lead the government of his new homeland.

It is important to note that the American genetic code transcends racial and ethnic divisions. Even though in the past American society was divided along racial and ethnic lines, from America’s earliest days people of all ethnic groups were able to become successes and contribute to our country’s greatness. Free blacks, Chinese laborers, native Indians, and others are all part of the story of the American Spirit and members of all groups have possessed the traits of American DNA. Over our short history, numerous groups from Irish to Catholics to Eastern Europeans have been subject to ethnic prejudices, but members of those groups have all overcome through risk-taking, hard work, and assimilation.

Further, many of today’s immigrants have the same gumption to leave home to make a better life for themselves and their families. Whether they flee a harsh dictatorship on a flimsy raft, cross a desert to escape economic distress, or come from the other side of the world on a ship or airplane for any of a million reasons, many possess the same traits of the immigrants of old.

Over time, this American Spirit has mostly stayed strong. The Westward Expansion led Americans to settle their entire portion of the continent. Americans are the only people in the world to set foot on the moon. American companies supply the world with consumer products and American farms feed the world. In 2009, even after the financial crash, half of the top ten companies on the Forbes 2000 list were American (http://www.forbes.com/lists/2009/18/global-09_The-Global-2000_Rank.html).

Even in the dark days of the Great Depression, when government grew on what was then an unprecedented scale, most Americans were not content to sit back and collect charity. Thousands moved west from the Oklahoma “Dust Bowl” to seek a new life in California. Others, who did collect from the government, were at least willing to exchange labor in groups such as the Civilian Conservation Corps for their government money.

Many worried that the American Spirit was dying in the days after Hurricane Katrina when many residents of the Gulf Coast seemed unwilling to work to better themselves and instead sat back to wait for government aid. However this year’s oil spill, affecting much of the same region, has brought a resurgence of American ingenuity and spirit as residents of coastal towns take the initiative to protect their homes, environment, and livelihood without waiting for help or approval from the federal government or BP.

Over the years, reliance on government programs has taken its toll on the American Spirit. Many forces have worked to slow and dampen the individualistic traits that built America. Today, far too many Americans, rather than working for something, are being paid by the government to do nothing. In many cases, the government even seems to prefer that its citizens do nothing. As one pundit put it, today’s federal government is “all check and no balance” (http://www.realclearpolitics.com/articles/2010/06/06/all_cog_no_machine_all_check_no_balance_105863.html). We are trading our adaptive and creative society for the illusion of risk-free prosperity. We are resting on our laurels.

If America is to survive, not only as a nation, but as a state of mind, we will need to reclaim the American Spirit for future generations. We can teach our children the value of calculated risk taking and hard work. We can instill in them a desire to learn so that they make valuable contributions to our society, rather than attempting to get rich quick through movies, music or sports. We can teach them the truth about America: that it is a light unto the world and that much of what is good about the world is due to America’s influence. Finally, we can teach them that what makes Americans is not our ancestry, but our American Spirit!

Thanks for reading, commenting, and following!