WWJD? Not be a Christian Nationalist 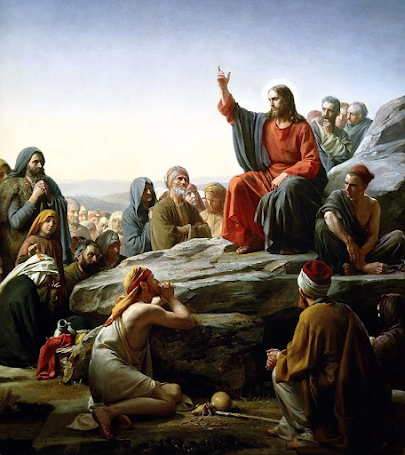 A couple of Twitter posts caught my attention over the holiday weekend. Both involved the growing Christian Nationalist movement. While both present bad ideas, the second was much more disturbing than the first.

The first was touting a lecture by my former fellow Resurgent writer, Josh Hammer. Hammer, who I had assumed was a conservative, was being lauded for promoting a platform of the “new right.” I’ll let you read for yourself what this entailed:

Thanks for reading The Racket News! Subscribe for free to receive new posts and support my work.

Chad Pecknold @ccpecknold
Great lecture by @josh_hammer on the new right: — a public orientation to God, an “ecumenical integralism” — no longer slashing government, but use it for the good of the family and nation — no more ghoulish, libertarian, zombie Hayekianism but a positive vision of the whole
5:33 PM ∙ Oct 8, 2022
214Likes57Retweets

Let me preface my comments by saying that I am a Christian. Having said that Hammer’s vision is a disturbing one. Let’s take it line by line.

“A public orientation to God, an ‘ecumenical integralism’” - Without having heard the lecture, it’s a bit hard to say exactly what this means, but in the context of the other items, “public” seems to mean “governmental.” If that is accurate, we immediately run into First Amendment concerns under the limitation that “Congress shall make no law respecting an establishment of religion, or prohibiting the free exercise thereof.”

Hammer’s defenders might point to the “ecumenical” part of the description as an answer, but the word literally means “representing a number of different Christian Churches.” This sounds a lot like Hammer is suggesting establishing Christianity as a state religion. That would be blatantly unconstitutional.

While I don’t have an objection to orienting towards God, the Constitution provides protection against a government-backed religion. In fact, a great many of America’s founders came here to escape just such an unholy pairing.

Today we have a vibrant interfaith nation that includes believers from many different religions. Those people may have beliefs that are different from our own and that may seem ridiculous, but they have a constitutional right to be protected in those beliefs.

I am not advocating for the removal of God from public life, but where the government is concerned, it is not “kosher” to force one particular religion onto any American, no matter how well-intentioned. I would argue that nonsectarian prayers or homages to God should be permissible, but I really don’t think that is what Hammer has in mind.

Hammer makes a couple of errors here. First, he assumes that he and his cohorts have the best knowledge of what is best for families and the country. This is the same error that progressives have made for decades in assuming that a few elites know better than the sum total of every American and every participant in the marketplace.

Josh Hammer will probably tell you that Democrats are out of touch when they say that people concerned about high gas prices should go out and buy an electric vehicle. I agree. That’s a nonsensical and impractical bit of advice.

But in the next breath, Hammer makes the same mistake by assuming that, even though Democrats don’t know what’s best for every American, he does. As the popular meme from “The Office” says, “They’re the same picture.”

I still belong to the traditional school of conservative thought that says that individuals know what is best for themselves. Where they don’t know, they are free to seek advice and information, but the ultimate choice on how to live life should belong to each American.

Part of the freedom to choose is the freedom to fail and to make bad choices. Americans have spoken in favor of safety nets in these cases, but Hammer is pushing for a theological nanny state. He seems to want a government that prevents its citizens from doing unbiblical and sinful things. Again, we run into the constitutional limits on federal power. Thank goodness.

“No more ghoulish, libertarian, zombie Hayekianism but a positive vision of the whole” - The obvious question here is whose positive vision. I think it’s pretty safe to assume that Hammer’s positive vision is a Christian one, but the Christian church is a lot more politically divided than Republicans would have you believe.

While it’s true that evangelical Christians are predominantly Republican, about two-thirds of Democrats consider themselves to be Christian. Pew broke down that number by denomination and found that a great many denominations are more Democrat than Republican.

Would Josh Hammer include the positive vision of denominations like the Presbyterians, Lutherans, Orthodox Christians, or African Methodist Episcopal that skew toward the left? My guess is that he would not.

Josh Hammer’s worldview in which Christian government officials exercise their power in a positive, Christian, Republican manner leads us to the second and more disturbing tweet.

Heerak Christian Kim was a failed Republican candidate for Virginia’s eighth congressional district. On Columbus Day, he tweeted, “Thank God that Christians slaughtered heathens through battle & God supported them through Acts of God ‘pestilence’ to conquer the New World in the Name of Jesus! Joshua in Bible proves preferred Christian war is always genocidal & targets civilians.”

There is quite a bit wrong with this.

First is the assumption that God doesn’t value the lives of “heathens.” My Bible tells me in 2 Peter 3:9 that God is “not willing that any should perish, but that all should come to repentance.” It’s difficult to bring people to repentance if you’re killing them.

Second, the Europeans would have almost certainly conquered the New World even if they hadn’t brought diseases that killed off a great many natives. Advanced European military technology made it almost impossible for the Indians to win in the end.

Further, with respect to Joshua, context counts for a lot. In the battles that Heerak alludes to, the Bible tells us that God gave specific instructions to kill all the inhabitants of certain cities in Canaan, but that is not a license for Christians thousands of years later to kill them all and let God sort them out.

Heerak’s error is a common one. He takes a verse that was meant for a specific person at a specific time and assumes it to teach a general concept of theology. Heerak ignores the broader context of the Biblical commandment that “you shall not murder.”

This was affirmed by Jesus in the New Testament when he taught an even higher standard, saying, “You have heard that it was said to the people long ago, ‘You shall not murder, and anyone who murders will be subject to judgment.’ But I tell you that anyone who is angry with a brother or sister will be subject to judgment. Again, anyone who says to a brother or sister, ‘Raca,’ is answerable to the court. And anyone who says, ‘You fool!’ will be in danger of the fire of hell.”

Now talk to me about mean tweets.

A final error in Heerak’s tweet is that Joshua, who lived about 1400 BC was not a Christian. Christ didn’t come until more than a thousand years later.

By now, you may be wondering why I’m linking these tweets together. The answer is that when you enable the government to do something, the threat of force is always implied.

Josh Hammer wants the government to use its bully pulpit to promote Christianity and biblical values. But what happens if Americans don’t like Christianity (or Josh’s version of it)? Heerak says genocide against heathens is a Christian thing to do.

The two combine into a dangerous worldview.

There are a few other problems as well. If a minority like Josh’s gains power and starts forcing its will on people who think differently, there will be a backlash. In a democratic system, no party is always going to be in power and an opposition party can take equal and opposite actions. Josh’s positive vision won’t last long.

The backlash could be an electoral one that installs leaders hostile to Christianity, but it could also be a backlash against Christianity itself. Christianity is fundamentally a religion of choice. It’s about having a personal relationship with Christ. That cannot be forced. It has to be something that people arrive at on their own. Forced conversions are not genuine conversions, and in an individualistic country like America pushing religion on people will have the effect of driving many away from the Gospel.

To make America a better and more christlike place, a better solution would be to get Christianity out of politics and focus on following Christ’s example and loving our neighbors. Remember that Jesus was offered political power over the whole world, but it wasn’t God that made this offer. It was Satan attempting to distract Jesus from his true mission.

Back in the 1990s, there was a fad of wearing bracelets with the letters “WWJD.” The letters asked the question “What would Jesus do?” and the bracelet was supposed to make you think before you acted rashly.

We need to resurrect WWJD and ask ourselves how Jesus would want us to act in the political arena. I don’t think he would be happy with most of us.

Posted by CaptainKudzu at 6:11 PM