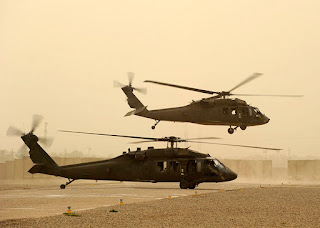 It was bound to happen. With hundreds of thousands of drones flying in the United States, many with amateur operators, one of them was bound to hit a manned aircraft sooner or later. New York City’s ABC 7 and Fox 5 are reporting that today was the day.

The local news teams say that a US Army UH-60 Blackhawk helicopter was struck by a drone over Staten Island today. The helicopter, based out of Fort Bragg, N.C. was conducting security patrols for the meeting of the United Nations General Assembly when it collided with the drone at approximately 500 feet above the ground.

The Blackhawk pilot was able to safely land the helicopter after the collision. There were no reported injuries.

There have been a number of reported collisions between manned aircraft and drones, but this may be the first in the United States. A Youtube video purporting to show a drone strike the wingtip of a Southwest Airlines 737 in 2015 was revealed to be a hoax.

Under current FAA regulations, “model aircraft” under 55 pounds are exempt from federal registration if they meet certain requirements. These model aircraft are not supposed to be flown higher than 400 feet or in a manner that conflicts with manned aircraft.

The drone collision over New York seems to have inflicted minimal damage on the helicopter, but future incidents might well be worse. Popular Mechanics notes that, unlike the flock of seagulls that sent US Airways Flight 1549 into the Hudson in 2009, a drone is made of denser materials.

“Birds can disintegrate relatively easily...you get something like a very viscous bulk of fluid on the other side” said Javid Bayandor of the Crashworthiness for Aerospace Structures and Hybrids (CRASH) Lab at Virginia Tech. “A drone can be like a rock going through the engine.”

As drones get bigger and become more and more common, the danger they pose increases. A large drone that is ingested into an aircraft’s engine – or worse, hits the cockpit at a high closing speed – at low altitude could have disastrous consequences.

Originally published on The Resurgent
Posted by CaptainKudzu at 7:23 PM