What to look for on election night 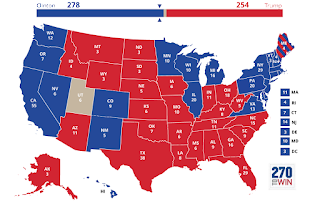 After almost two years in the making, Election Day 2016 is almost here. Thanks to Russia, WikiLeaks and the FBI, the election looks to be much closer than many of us thought it would be. Polling is close, but favoring Hillary Clinton. At this point, it is by no means a blowout and Donald Trump does have a chance of winning.

There are several very important races on the East Coast where polls will close first. The swing states of Florida, North Carolina, Ohio and Virginia will all be among the first states in the nation to be decided. Virginia has been generally assumed to be leaning toward Clinton so the other three states are all must-win for Trump. Although wildly inconsistent, polling seems to show Clinton ahead in North Carolina and Trump leading in Ohio. Florida is a dead heat. If Trump doesn’t carry Florida, North Carolina and Ohio the race may well be over before polls close in the Central Time Zone.

There are also three blue states to watch that have been soft in their support for Clinton. Even if he wins all the swing states, Trump must flip at least one sizable blue state or states worth about 12 electoral votes to win the Electoral College. Some observers believe that Pennsylvania is his best chance to do that. If Trump manages to flip Pennsylvania and take the swing states, the Clinton campaign will have a long night.

New Hampshire and Maine’s second congressional district also give Trump a chance to peel off some of Hillary’s electoral votes. Polls in New Hampshire have closed in recent weeks with several polls showing Trump in the lead. These small prizes probably won’t decide the election, but could signal a shift in the electoral map.

There is also one traditional red state to watch. A recent poll in Georgia showed Trump with only a one-point lead. Other polls over the past few months showed a tight race in the Peach State. Georgia will probably rally toward Trump, but a Clinton victory there could mean a rout for Donald Trump.

In the central states, Iowa is the only traditional swing state. Trump is currently favored there and it is the most likely swing state for him to flip.

A bad night for Hillary Clinton might see close races in Michigan and Wisconsin. She is favored in both typically blue states, but by single-digit margins. Trump originally had high hopes of competing in these Rust Belt states, but was never able to gain traction.

The red state of Texas showed a tight race several weeks ago, but the gap has since opened in favor of Trump. Still, a large Hispanic electorate could mean problems for Donald Trump. If Georgia goes for Hillary, keep a close eye on Texas.

Moving west, there are four states to watch. Colorado and Nevada are traditionally considered swing states and both remain in tossup status. Colorado is favored for Clinton, but the race is very tight. The situation is the same in Nevada where Trump holds a slight edge in polling.

Arizona is another red state to watch. Over the past few weeks, Hillary Clinton was actually able to take the lead for a brief time in this border state that typically goes Republican. Trump regained some ground to take a slight lead, but is still running well behind Sen. John McCain (R) in his reelection bid. Like Texas, Trump’s weakness with Hispanic voters could cause him problems in Arizona.

The deep red state of Utah will be one of the most interesting states to watch. Native son Evan McMullin is mounting a surprisingly strong independent campaign and was in the lead for a short time. Trump is currently favored but uneven polling for third party candidates may mean that McMullin has a better chance than generally believed.

Of the eight races, the Republicans are only the favorite in Florida where Marco Rubio should be reelected. The Democrats are favored in Illinois and Wisconsin. That leaves three tossup races in Missouri, New Hampshire and North Carolina. Indiana and Pennsylvania also recently moved from likely Democratic to tossup status as polling for the Republican incumbents improved.

Additionally, the Democrats are defending one Senate seat in a tossup race. Republican Joe Heck is fighting hard for Harry Reid’s seat in Nevada. The race has been within the margin of error of most polls.

In the House of Representatives, the Republicans are expected to lose seats, the big question is how many. There seems to be little question that Republicans will still control the House next term. This will provide a firewall against the Clinton agenda if Hillary wins and the Democrats take the Senate. It will not prevent Hillary from appointing radical judges, however.

Trump’s path to the presidency is a narrow one. Trump must win all of the swing states that are still in play plus at least one blue state. Hillary has an easier task. She can block him by winning Florida or North Carolina and holding Pennsylvania. The battle for the Senate is much less clear with six tossup races to watch.

One way or another, the long national nightmare of the 2016 campaign is almost over. We are about to embark on an entirely new one.

Originally published on The Resurgent
Posted by CaptainKudzu at 8:57 PM