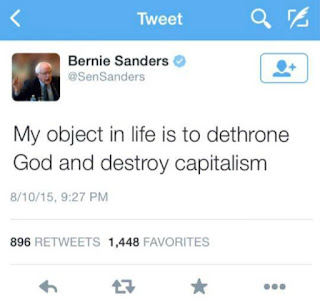 Yesterday an alarming tweet by Democratic candidate Bernie Sanders went viral. The tweet contained the radical message, “My object in life is to dethrone God and destroy capitalism.” The big problem is that the tweet is fake.

The phrase in the tweet is actually attributed to Karl Marx, German revolutionary and the father of communism. The quote does not appear in “The Communist Manifesto,” Marx’s most famous work or any of his other known writings, but is similar to a documented quote from “Revelations Concerning the Communist Trial in Cologne.” In that work, Marx wrote, “If I dethrone God I also dethrone the king who reigns by the grace of God.”

Bernie Sanders, a sitting senator from Vermont, is an avowed socialist. While the line between socialism and communism is thin and blurred, Sanders seems to shy away from vocally supporting communist countries like the Soviet Union and China. Instead, he lavishes praise on the democratic socialism of Scandinavian countries like Denmark, Norway and Sweden according to Oregon Live.

Steven Wolf of Daily Kos notes that Sanders “Sanders advocates for three things that should be the backbone of the Democratic Party. These include reducing economic inequality, removing the rigged influence of the rich on our political system, and of course most importantly, preventing climate change.” He calls Sanders a social democrat “despite his chosen label of democratic socialist” and notes that this breed of politician wants to “ensure that every person has access to housing, health care, education, meaningful employment, and transportation.” With the exception of reducing the influence of the rich on politics, this makes Sanders almost indistinguishable from other Democrats, including Hillary Clinton.

It must be noted that the reference to “dethroning God” can apply to many modern Democrats as well. Democrats have shown a hostility to the free expression of religion in recent years including loud opposition to religious freedom laws. In 2012, an attempt to add a reference to God to the Democratic platform resulted in loud, almost overwhelming, boos.

Sanders, who is Jewish, is not religious, but does not seem overtly hostile to religion. According to the Christian Post, he is more likely to pick and choose from various religious texts to find passages that support his views. For her part, Hillary Clinton said in a speech last March that “deep-seated cultural codes, religious beliefs and structural biases have to be changed” to make way for more progressive policies according to the Daily Caller.

While Sanders might or might not agree with the Marx quote, he apparently never tweeted it. A review of the timeline of the Sen. Sanders Twitter account does not show the offending tweet. The time stamp on the tweet is August 10, 2015 at 9:27 p.m. There is a tweet on the Sanders timeline at the same time, but with a different message. The actual Sanders tweet reads, “The cost of war is real. It is terrible. I believe that war should be the last resort, not the first resort.”

A comparison of the two tweets reveals a subtle difference. The fake tweet shows the date is numeric characters while the authentic tweet uses the word “August” in the date. This may simply reflect a difference in device or settings. 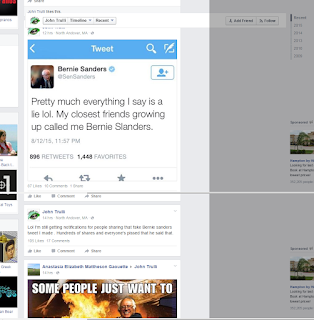 The post immediately above Trulli’s admission of responsibility is another fake Sanders tweet. This one reads, “Pretty much everything I say is a lie lol [sic]. My closest friends growing up called me Bernie Slanders.” Further examination of his timeline shows other tweets supposedly by George W. Bush, Barack Obama and Hillary Clinton.

An attempt was made to contact the Sanders campaign in connection with this article, but no reply was received. Sanders leads Mrs. Clinton by a small margin in the latest New Hampshire poll.

Read the full article on Examiner.com

Posted by CaptainKudzu at 2:29 PM