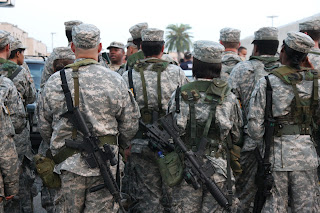 This week’s attack by an alleged Islamic extremist on a military recruiting office in Chattanooga was not the first such attack on soldier on American soil. In spite of a string of attacks on military bases and recruiting offices in the past several years, the Obama Administration several has not taken steps to allow military personnel to carry weapons for self-defense. Today a growing number of state governors are taking action to protect their state National Guardsmen from similar attacks.

According to CNN, there have been at least three successful attacks on military targets in the United States in recent years. In 2009, Carlos Bledsoe killed one soldier and wounded another outside an army recruiting office in Little Rock, Ark. Bledsoe was a convert to Islam who had been arrested in Yemen the year before in possession of a fake ID card, bomb making manuals and a phone that contained contacts with Islamic militants.

Also in 2009, Nidal Hasan, an army major and Muslim who opposed the war in Afghanistan, killed 13 soldiers and wounded 32 at Fort Hood, Tex.

In 2013, Aaron Alexis, a civilian contractor and former navy sailor, killed 12 people at the Washington Navy Yard. Alexis had a history of mental health problems.

In at least two other cases, plots to attack US military bases were disrupted by authorities. In 2008, five Muslim immigrants were found guilty of plotting to attack Fort Dix, N.J. "to kill as many American soldiers as possible" according to the Washington Post. Earlier this year, an Illinois National Guardsman and his cousin were accused of plotting to join ISIS and attack a National Guard base in Joliet, Ill. reported the Chicago Sun Times.

In spite of this pattern of attacks, military leaders and the Obama Administration still prohibit the carrying of firearms on military bases, a policy that dates back to March 1993. While the perimeter of many military bases can be easily secured, military recruiting offices cannot. As Maj. Hasan and Alexis demonstrated, a person with access to the interior of a military base can do serious damage before defenders can respond.

Army chief of staff Gen. Ray Odierno told Fox News yesterday that he would conduct a review of security procedures at recruiting offices, but thought that allowing recruiters to be armed might "cause more problems than it solves."

In a tweet, ABC News correspondent Luis Martinez said that “Marine Corps Recruiting Command has instructed Marine recruiters not to wear uniforms at work, part of force protection since Chattanooga.” This was unverified by other sources.

Some states are taking a stronger tack. The governors of Arkansas, Indiana, Louisiana, Oklahoma, and Texas have issued orders to their state National Guard troops to take action to prevent a Chattanooga-style terrorist attack.

At least six state governors have announced plans to allow National Guard troops to carry weapons. Houston’s ABC 13 said today that Greg Abbott (R-Tex.) will arm Texas National Guard soldiers at their bases to “not only serve as a deterrent to anyone wishing to do harm to our service men and women, but will enable them to protect those living and working on the base.”

In Florida, Rick Scott (R) issued an Executive Order temporarily moving National Guard recruiting offices from commercial stores to armories until state officials can assess and enhance the security of the stores according to the Florida Times-Union. Scott’s order also armed the state’s Guardsmen.

The Hill reports that Mary Fallin (R-Okla.) also issued an order allowing full-time Guardsmen in Oklahoma to be armed.

This afternoon, Mike Pence (R-Ind.) became the most recent governor to issue such an order according to Fox 59.

Individual governors can arm their state’s National Guard because the Guard is under state control in normal circumstances with the governor as the commander-in-chief. The National Guard can also be federalized by the president for use with the regular army in combat operations or disasters.

As the death toll from attacks on military installations mounts, it seems likely that more governors will take steps to protect their state soldiers from attack. As Greg Abbott said, “After the recent shooting in Chattanooga, it has become clear that our military personnel must have the ability to defend themselves against these type of attacks on our own soil.”

Posted by CaptainKudzu at 2:10 PM