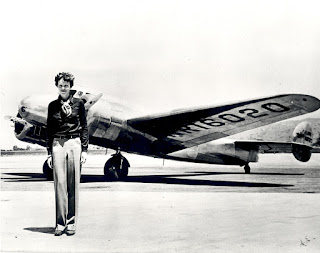 The “lost evidence” for Earhart’s survival consisted of a photograph that showed people who resembled Earhart and Noonan on a dock on Jaluit Atoll in the Marshall Islands. The History Channel’s assumption, based on the resemblance of the people in the photo to Noonan and Earhart, was that the pair had survived their last flight and were taken prisoner by the Japanese and later executed.

In a post on July 9, Japanese military history blogger Kota Yamano challenged the History Channel claim. Yamano said that an internet search for the picture revealed that it was taken too early to be Earhart and Noonan. The picture was originally published in a travelogue, “The Ocean's ‘Lifeline’: The Condition of Our South Seas,” in 1935, two years before the disappearance of Earhart and Noonan.

“The photo was the 10th item that came up,” Yamano said in an interview with The Guardian. “I was really happy when I saw it. I find it strange that the documentary makers didn’t confirm the date of the photograph or the publication in which it originally appeared. That’s the first thing they should have done.”

There were other problems with The History Channel theory as well. The Daily Beast points out that when Charles Lindbergh made an emergency landing in Japan in 1931, he was given a hero’s welcome. The Daily Beast also cites a Japanese book from 1982 that detailed the story of a crewman on the Japanese navy ship in the picture. According to the testimony of Japanese veterans, the Japanese navy was instructed to join the search and rescue effort for Earhart. The ship’s log contains no mention of Earhart or Noonan.

Earhart and Noonan disappeared on July 2, 1937. At that time, relations between the US and Japan were still good. The attack on Pearl Harbor was four years away. Even though fighting in the Pacific predated America’s entry into World War II, the region was still largely peaceful at the time. Japan’s war with China began five days after Earhart’s disappearance with a battle between Japanese and Chinese forces at Marco Polo bridge in Beijing. At the time, Earhart disappeared, the Japanese had not motive to keep her rescue a secret.

The theory that Earhart went off course on her way to Howland Island and wound up crash landing in the Marshall Islands also strained credulity. The Marshall Islands are 1,000 miles away from Earhart’s intended target. To end up there, Earhart and Noonan would have had to fly to the vicinity of Howland Island, realize that they were lost, and then, low on fuel and disoriented in bad weather, fly past numerous other islands for another thousand miles.

On the other hand, Steve Milloy of Junk Science claims that a graphic used in The History Channel’s documentary undermines the argument for rising sea levels due to climate change. The graphic shows Mili Atoll, an island in the Marshall Islands, with markings that say “area between blue lines was shore in 1937.” The blue lines on the photo show a forested area in 2017. If the History Channel photo is accurate, Mili Atoll has grown since 1937 instead of getting smaller due to rising seas.

The History Channel documentary does point out that coral islands can change shape over time. A 2015 report by New Scientist found that, even if sea levels rise, many islands are rising faster.

If the History Channel expose’ was truly a bust on the scale of Gerado’s unveiling of Al Capone’s vault, what really happened to Earhart and Noonan? Sometimes the simplest and most obvious explanation is also the correct one. The pair were using primitive navigation methods to Howland Island, a small, isolated speck of land. The Pacific is a very big ocean and Earhart and Noonan are most likely at the bottom of it.

Read the full article on The Resurgent

Posted by CaptainKudzu at 10:52 AM