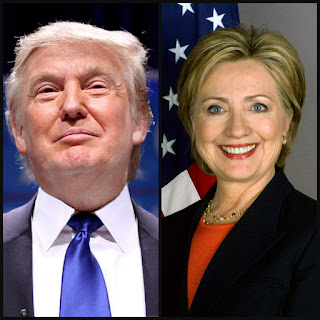 This week was perhaps the most damaging week of Hillary Clinton’s career. FBI Director James Comey’s decision to recommend that she not be charged for mishandling classified information was overshadowed by the facts that he laid out. Comey called her “extremely careless” in her handling of classified information and judged that her account, as well as email accounts that she was in contact with, were likely compromised by “hostile actors” that could threaten the security of the United States. How has Trump responded to the FBI assault on the basic competence of his opponent? He spent several days embroiled in a controversy over an allegedly anti-Semitic tweet and then came out of in favor of Saddam Hussein and Moammar Gadhafi. Why isn’t Trump attacking Hillary?

To be sure, Donald Trump did accuse Clinton of offering a “bribe” to Attorney-General Loretta Lynch by floating the possibility that Lynch might keep her job in a Clinton Administration. The Washington Post noted that Clinton has never publicly stated that Lynch might be welcome in her White House, but that the New York Times had attributed the idea to Democrats close to Clinton.

NBC News also reported that Trump had criticized Director Comey’s decision at a rally in North Carolina on Tuesday, July 5, the day of the FBI announcement. Trump used his pet name for Clinton, “Crooked Hillary,” and told the audience, “You didn't have to be careless. You didn't even have to really know that what you were doing was wrong, and you're guilty. The laws are very explicit. Stupidity is not a reason that you're going to be innocent, OK? It's not a reason.”

At that point, Trump seemed to veer off message. He became distracted by a controversy about a Trump campaign tweet that featured a six-pointed star that some associated with a Star of David. The tweet featured Hillary Clinton in front of a pile of cash and carried the logo, “History made: Most corrupt candidate ever.” The phrase, “most corrupt candidate ever” was inside a six pointed star that has been variously described as a “Star of David” and a “sheriff’s star.” CNN notes that the meme originally appeared “on an anti-Semitic, white supremacist message board.”

Trump said in a tweet that his campaign should not have removed the controversial meme and defended the star on Wednesday, July 6. CNN commented, “Trump's comments on Wednesday revived a controversy that appeared to be quickly fading under the weight of the news that Hillary Clinton's private emails included classified information, and that she will not face charges. On a day when Clinton's controversies dominated the airwaves, Trump resurrected his own.”

By Wednesday night, Trump was totally off message. Rather than spending time attacking Clinton’s judgement, Trump told a North Carolina crowd that Saddam Hussein was a great anti-terrorist.

“He was a bad guy -- really bad guy. But you know what? He did well? He killed terrorists. He did that so good. They didn't read them the rights. They didn't talk. They were terrorists. Over. Today, Iraq is Harvard for terrorism,” Trump said.CNN points out that Trump supported the Iraq War in 2003.

Donald Trump not only is wrong about history, his comments further focused attention on himself and distracted attention from Hillary Clinton’s disastrous week. This is not the first time that Trump has gone easy on Clinton.

On June 2, Clinton sharply mocked Donald Trump on foreign policy. “Donald Trump's ideas are not just different, they are dangerously incoherent,” she said in Reuters. “They're not even really ideas, just a series of bizarre rants, personal feuds and outright lies.” She went on to speculate that Trump might start a nuclear war if elected to the White House simply because “somebody got under his very thin skin.”

One might expect a broadside against the Secretary of State who presided over the withdrawal of US forces from Iraq and the rise of ISIS, the bungling of the Arab Spring and the Iranian uprising, the implosion of Syria, the failed Russian reset, and, of course, the debacle at Benghazi. One would be wrong.

Rather than challenging Hillary on the substance of her speech or attacking her own record, Trump responded with tweets as Hillary predicted he would do during her speech. The first gave a general challenge to Clinton’s credibility while the second criticized her poise.

In fact, Trump’s attacks on Hillary seem very restrained. Compare his criticism of Clinton to his concerted attacks on Judge Gonzalo Curiel, the judge assigned to his Trump University fraud case. Trump spent weeks and devoted large amounts of air time to attacking Judge Curiel’s Mexican heritage just after becoming the presumptive Republican nominee. The time might have been better spent unifying the Republican Party or launching attacks on Hillary Clinton, who had yet to secure her own nomination.

The Wall Street Journal reported that, after clinching the Democratic nomination, Clinton ran 20,000 ads to get her message out to potential voters. For the same period, Trump ran none. Zero. Not a single commercial. This total shutout in advertising is almost certainly what allows Hillary to maintain a lead over Trump in spite of her seriously damaged campaign.

While Trump may be attacking Hillary at his campaign rallies, his criticisms are overshadowed by his own outlandish and rambling comments. Time and time again, Trump’s antics have distracted the news cycle from Hillary’s troubles. Whatever his strategy or motive, his anti-Hillary message is not getting out to voters. Trump is destroying his own campaign.

Read it on Conservative Firing Line
Posted by CaptainKudzu at 12:57 PM