Trump and Cruz approval hits record low; both may be unelectable 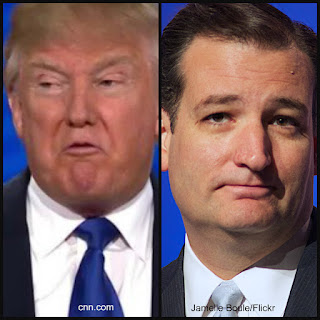 As the two leading contenders for the Republican nomination continue to hammer each other in round after round of primaries, it seems likely that neither will achieve a knockout or win enough delegates to win a decision at the convention. At this point, the main accomplishment of Donald Trump and Ted Cruz seems to have been to bruise and bloody each other enough so that neither is likely to be able to beat the presumed Democrat champion, Hillary Clinton.

Donald Trump, the perennially unpopular candidate who has been continually reviled since his campaign’s inception last summer, continues to hold the most negative rating with a net approval rating of -35. For those of you in Rio Lindo, this means that people who disapprove of Trump outnumber those who approve of him by 35 points. According to Washington Post research, Trump has the most negative rating of any serious presidential candidate ever. The only candidate who has ever rated worse than Mr. Trump is David Duke, a former Ku Klux Klan leader who ran for the Republican nomination in 1992.

Ted Cruz fares better in Gallup’s findings, but not by much. Cruz, who held a positive approval rating as recently as December has seen his rating plummet to near-Trumpian levels. Cruz’s -16 rating is actually one point higher than Donald Trump’s all-time high. Like Marco Rubio, whose campaign imploded when he adopted Trump’s tactics, Cruz is being tarnished by his tit for tat with The Donald.

Ironically, the third place finisher who is the odds on favorite to become the next president, Hillary Clinton, also has a negative rating. Nevertheless, the only candidate under investigation by the FBI (that we know of) and the only candidate who is likely to be indicted during the campaign, is still more popular than Donald Trump and Ted Cruz. Her -11 rating is not her lowest and actually seems to be an improvement. Hillary’s approval rating has been remarkably consistent, even if slightly underwater, for the entire campaign.

The negative ratings of the two most likely Republican contenders may explain the increase in party identification among Democrats over the past few months. In the latest Gallup poll of party affiliation, Democrats led Republicans by six points. When leaners were taken into account, Democrats held an 8 point advantage. This margin is practically identical to the Democratic lead over Republicans as the 2012 elections approached.

Who fares best in the current public opinion? Ironically, it is John Kasich with a net favorable rating of 19 points who looks best to American voters. In a somewhat close second, Bernie Sanders finishes with a net positive rating of 10 percent.

Why are the also-rans finishing so much better than the frontrunners? In the case of Trump and Cruz, it might be that their attacks on each other have left the public with a sour taste its mouth. The anti-establishment and hardline immigration rhetoric of the pair might also simply not resonate with voters outside the Republican Party’s base.

Bernie Sanders’ popularity may be a rejection of Hillary Clinton among the Democratic Party base. Hillary is not generally well liked or trusted even among Democrats. Her FBI investigation and looming possible indictment have not gone unnoticed. Neither have the fundraising practices of the Clinton Foundation or Clinton connections to Wall Street. Sanders’ combination of democratic socialism and folksy populism is appealing for a party whose base has drifted farther and farther left during the eight years of the Obama Administration.

The widespread dissatisfaction with the leading candidates spells trouble for both parties. Ironically, for all their division Republicans may have an advantage here. If no Republican can win a majority and clinch the nomination, an open convention may present the party with a rare chance for a do-over. Scott Walker, the Republican governor of Wisconsin recently told The Cap Times, “I think if it’s an open convention, it’s very likely it would be someone who’s not currently running. I mean, who knows?”

Read it on Conservative Firing Line and Freedom Daily
Posted by CaptainKudzu at 10:27 AM