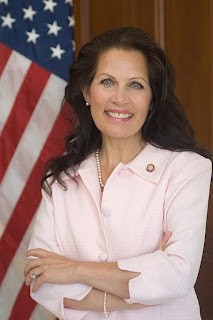 It is perhaps inevitable that Michele Bachmann will be compared to that other prominent conservative woman, Sarah Palin.  Both women are outspoken Midwestern brunettes and conservative Christians.  Both are also reformers and darlings of the Tea Party movement who sometimes put their feet in their mouths.  Both may ultimately end up competing for the same Tea Party votes if Sarah Palin decides to enter the 2012 presidential campaign as well.
Bachmann was born Michele Marie Amble in Waterloo, Ia. in 1956.  Her family moved to Minnesota when she was a young girl.  Her parents later divorced there.  Her mother raised her until she remarried when Michele was a teenager.
She graduated from high school in Anoka, Mn. in 1974.  After high school, she worked on a kibbutz in Israel even though she was raised as a Lutheran.  She told TCJewfolk.com that she considers her “heritage Jewish, because it is the foundation, the roots of my faith as a Christian.”
When she returned to the U.S., she earned a B.A. from Winona State University in Minnesota.  She then continued to the O.W. Coburn School of Law at Oral Roberts University where she earned a Juris Doctor in 1986 and the College of William and Mary where she earned an L.L.M. in tax law in 1988.  She had married Marcus Bachmann in 1978 and the couple moved to Stillwater, Mn. after her graduation from William and Mary.  Ironically, Michele met Marcus while working on Jimmy Carter’s presidential campaign in 1976.
From 1988 to 1993, Bachmann worked for the IRS as a tax attorney in St. Paul, Mn.  She left the IRS to become a full-time mother to the couple’s five children and has also raised twenty-three foster children.  Her husband, Marcus, operates a Christian counseling center.
Bachmann’s political career began in 1999 when she ran in a nonpartisan school board election in Stillwater.  She lost that campaign, but was elected to the Minnesota state senate in 2000, defeating a long-time Republican incumbent in the primary and a Democratic-Farm-Labor (DFL) candidate in the general election.  In 2002, after senate district lines were redrawn, she ran against a ten-year DFL incumbent and was re-elected.  In 2006, she was elected to the U.S. House of Representatives where she replaced Mark Kennedy, a Republican who left the house to run for the U.S. Senate.  In congress, Bachmann is on the Financial Services Committee and the Permanent Select Committee on Intelligence.
While in the Minnesota senate, Bachmann was a strong defender of traditional marriage.  She introduced a definition of marriage amendment, but it failed to pass the DFL-controlled senate.  Minnesota has a Defense of Marriage law but it is not constitutionally defined.
While in congress, Bachmann has opposed the expansion of government power and spending while supporting free market solutions.  She opposed the financial and auto bailouts and supported President Bush’s Iraq War surge as well expanded domestic oil drilling.  She introduced the Light Bulb Freedom of Choice Act in response to the Democratic ban on incandescent bulbs.  She supports the repeal of President Obama’s health care reform and the Dodd-Frank financial reform.
Bachmann has also made a number of statements that smack of conspiracy theories.  In 2009, she initially refused to complete a census form because the questions had become too personal and because ACORN was involved in helping to recruit census workers.
Also in 2009, the Minnesota Independent reported that Bachmann feared that the Edward M. Kennedy Serve America Act had “provisions for what I would call re-education camps for young people, where young people have to go and get trained in a philosophy that the government puts forward and then they have to go to work in some of these politically correct forums.”
Bachmann has also made a number of historical gaffes.  In one case, she confused Lexington and Concord in New Hampshire for the Lexington and Concord in Massachusetts where Minutemen “fired the shot heard round the world.”  In another incident, according to Politico she claimed that the Founding Fathers “worked tirelessly until slavery was no more in the United States.”  In reality, slavery continued in the United States for almost a hundred years after the founding of the country.
More recently, when she made her candidacy announcement in her hometown of Waterloo, Ia. Bachmann referenced John Wayne, who she said was also from Waterloo.  In reality, John Wayne was from Winterset, Ia.  The similarly named John Wayne Gacy, a serial killer, lived and worked in Waterloo before he was convicted of thirty-three murders and executed in 1994.
Bachmann was singled out by liberal pundits after the Tucson shootings in January 2010 for saying in March 2009 that she wanted people “armed and dangerous.”  Many liberals tried to paint this quote as an example of violent conservative rhetoric.  In reality, when the quote is taken in context, it is clear that Bachmann meant that voters should be armed with information.
In spite of her weaknesses, Bachmann has a gift for fundraising.  The Atlanta Journal reports that in 2010 her campaign collected more money than any other congressional candidate.  Many of Bachmann’s contributions come in small amounts from a large network of supporters around the country.
At this point, Bachmann ranks seventh in a recent index of polls by Real Clear Politics.  She trails Mitt Romney, Sarah Palin, Rudy Giuliani, Herman Cain, Newt Gingrich, and Ron Paul.  She leads Rick Perry, Tim Pawlenty, Rick Santorum, and John Huntsman.  In a June 3 Insider Advantage/WSB-TV poll of Georgia voters, Bachmann placed second with thirteen percent.  Herman Cain placed first with twenty-six percent.
Michelle Bachmann is undoubtedly a very intelligent woman.  Her educational background is probably one of the most impressive in Congress and her experience as a tax lawyer would be beneficial in writing the tax reforms that the country desperately needs.  However, Michelle Bachmann is her own worst enemy when it comes to creating embarrassing sound bites.  If she cannot stop making outlandish statements it will be impossible to take her candidacy seriously.   In the age of Youtube, her campaign may already have been damaged beyond repair.
http://www.examiner.com/elections-2012-in-atlanta/meet-the-candidates-michele-bachmann">

Posted by CaptainKudzu at 10:20 AM